You are here: Home » Food Preparation » What Is Rhodiola? (the anti-fatigue, anti-stress adaptogen!) 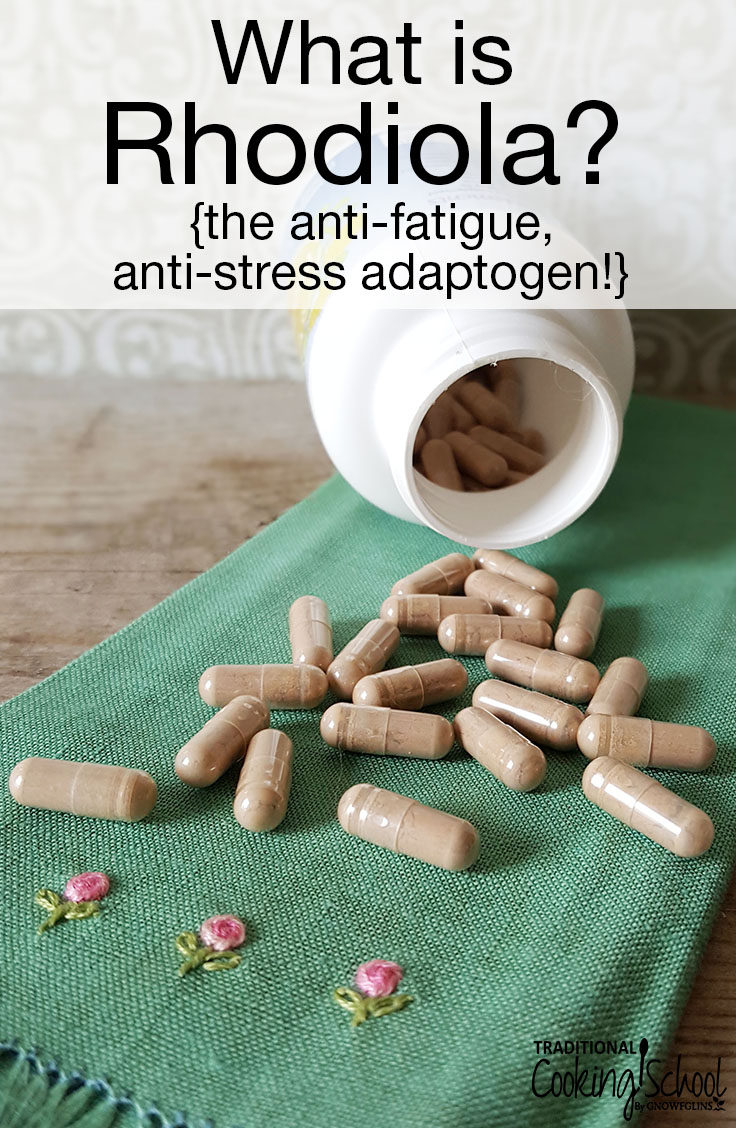 Every time I look at my belly, I see evidence of my stressful life.

Today’s modern world is full of stress — thanks to our food, environment, relationships, jobs, and finances… Just to name a few!

Because stress increases cortisol levels, and excess cortisol due to chronic stress seems to be a factor in fat accumulation around the midsection (source), there’s a prevailing body type among people with “adrenal fatigue”, or HPA axis dysfunction.

I have it: toothpick legs and a fatty upper body. It makes buying pants so fun (not!). If jeans fit my waist, the legs are ginormous. And I can forget about buttoning jeans that fit my legs properly!

This is just one effect of chronic stress, but it’s the one with which I’m very familiar.

Thankfully, there are ways to mitigate the harmful effects of chronic stress on our bodies. Such as… adaptogens. Was I eager to try these natural hormone-balancing herbs? You betcha! 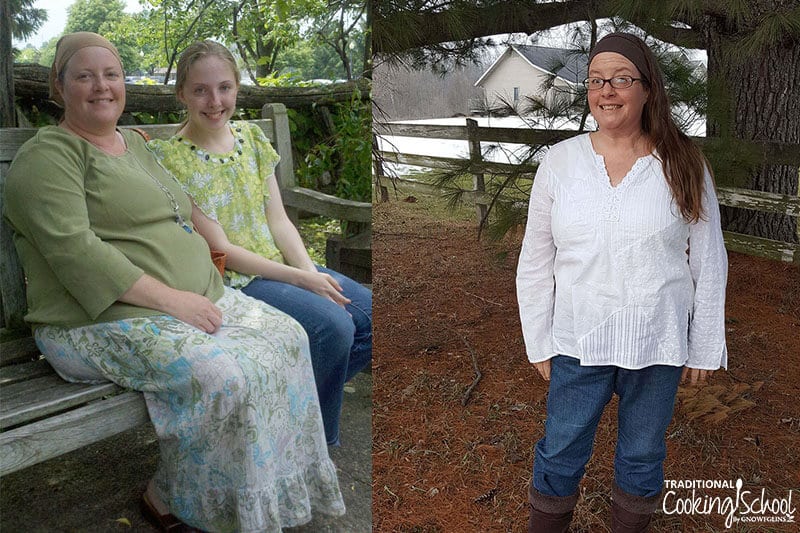 Ashwagandha Led Me To Rhodiola

The first adaptogen I tried was ashwagandha. Having been a night owl all my life, I was amazed that within a few days — I suddenly wanted to go to bed at a decent hour!

Good, consistent sleep is incredibly important for stress relief because the body works on repairing and restoring itself during the night. Optimal healing seems to occur between 11 p.m. and 1 a.m. so while staying up late may seem peaceful, quiet, and lovely, it actually disrupts the body’s natural healing cycle (source).

Now, what about belly fat? My clothes did get more loose, but I also follow Trim Healthy Mama so it’s hard to say for certain what caused it.

Overall, I was encouraged by these changes! I also wanted to try other adaptogenic herbs, though, to see if they would help me reach my goals:

My search led me to rhodiola, or rhodiola rosea.

Also known as “golden root”, rhodiola is a traditional, centuries-old medicine. It typically grows in northern regions of Asia and Scandinavia, and is now taking root in Alaska (source). The Vikings and Sherpas used it for endurance and to treat fatigue and depression. More recently, athletes, KGB agents, and even Russian diplomats have used it for the same reasons (source).

Russian scientists originally conducted research on this arctic root in secret, and it was only after the collapse of the Soviet Union in 1994 that their findings became available to the world at large. So rhodiola is relatively new to American herbalism!

Since it’s one of the most widely studied adaptogens, it boasts an impressive array of benefits:

Recent studies have also shown rhodiola to extend the lifespans of flies, worms, and yeast (source). I know, who wants those guys to live longer?!

Yet the implications are exciting: Just as arctic dwellers have known for centuries, this adaptogenic herb might contribute to longevity. I’m all for living a long, healthy, and happy life. How about you?

What Rhodiola Has To Do With HPA Axis Dysfunction

If you’ve read Why Adrenal Fatigue Is Really HPA Axis Dysfunction, then you know that so-called “adrenal fatigue” is far more complex than worn-out adrenal glands. Some people with severe HPA axis dysfunction may experience too little cortisol, while others of us with dysfunction that isn’t so progressed may have too much cortisol.

Rhodiola may act as a kind of “inoculation” against stress and help modulate the HPA axis (source). In other words, it may help rein in those stress hormones such as cortisol in people who have too much.

According to a comprehensive review in HerbalGram, the journal of the American Botanical Council, the herb Rhodiola lessens the release of stress-related hormones. It is believed that Rhodiola’s beneficial properties stem from its ability to influence the activities and levels of brain chemicals such as serotonin and norepinephrine as well as the natural “feel good” hormones such as beta-endorphins. In addition, Rhodiola rosea has extraordinary pharmacological properties as an anti-mutagen and anti-depressive agent. (Source.)

Rhodiola may also be helpful in treating anxiety (source), depression (source), and improving overall brain and neurological function, including helping those with ADHD focus better (source).

Side Effects Of Rhodiola

While the majority of users don’t experience side effects, some people might. These include: insomnia, irritability, mild jitters or shakes, restlessness, and vivid dreams (source).

For most people, rhodiola would need to be taken in rather large doses to experience such effects. Although for extremely sensitive people, it’s possible to experience them without taking a large dose.

Regardless, rhodiola seems to be very safe…

All current research suggests rhodiola rosea has a very low toxicity. Current toxicity studies indicate its LD50 (dose at which 50 percent of the tested animals perish) is about 28.6 ml/kg, or about 3,360 mg/kg.

For perspective, such dosage in a 70 kg (roughly 154 pounds) man would be 235 gm or 235,000 mg. Since most recommended doses are about 100 to 400 mg and the total recommended dosage for an entire day rarely exceeds 600 to 1000 mg, you can see there is a very large margin of safety, much larger than with apparent ashwagandha side effects. (Source.)

Learn more about rhodiola’s side effects here, plus information for how to use rhodiola if you have diabetes or hypoglycemia.

How To Find A Quality Rhodiola Supplement

Due to its popularity among runners and other fitness-minded people, a quick Internet search easily yields any number of rhodiola formulas! How do you know what to look for?

Ideally, you want a 3:1 ratio of rosavins to salidroside — the two powerful components in rhodiola responsible for its remarkable benefits. This is the ratio that naturally occurs in rhodiola root, and what current research supports as effective (source).

Recent research clearly indicates that a whole extract of R. rosea must first; contain all the identifiable marker compounds and/or active constituents (the rosavins and salidroside) in ratios that reflect the phytochemistry of the natural plant, which is 3:1. It must also conform to the product specifications that have proven effective in repeated clinical trials. The ratio of rosavins to salidroside in the R.rosea root is approximately 3:1. Therefore, analysis of the ratio of the rosavins and salidroside in the extract is very powerful tool to evaluate the origin and purity of R. rosea extract. This is the new standard, which was adopted by the Russian Pharmacopoeia Committee. (Source.)

Also look for pure rhodiola rosea. Some products are cut with other rhodiola species, such as rhodiola sacra.

I recently ordered Perfect Supplements brand of Siberian rhodiola rosea — it comes in a veggie capsule in the recommend 3:1 ratio. I’m excited to let you know how I like it!

How To Take Rhodiola

First of all, before taking any herbal supplement, do your research and consult with your trusted holistic healthcare practitioner.

Take rhodiola in the first half of the day, especially if you’re one of those people who gets a big energy boost from it. It can interfere with sleep. Start with a low dose, such as 100 mg, and slowly work your way up. Take it on an empty stomach 30 minutes before eating (more information here on dosage and timing).

Traditionally, rhodiola root was brewed into a tea or made into a tincture (learn how here!). You can also buy rhodiola tincture. It does have a strong, medicinal, bitter taste so you may prefer to take it in capsule form.

Remember, There Is No Such Thing As A Magic Pill!

Resist the urge to believe hyped-up ads for magical pills or drinks that will make you skinny and healthy overnight. These never work, and as wonderful as rhodiola and other adaptogens sound, they aren’t a magic pill, either.

Used properly, and in conjunction with other healthy habits — such as traditional foods, plenty of sleep, gentle movement, healthy relationships, and even a strong spiritual life — adaptogens can do wonders for your health.

Do you use rhodiola or any other adaptogens? What have they done for you?