You are here: Home » Health & Nutrition » The Difference Between Soil-Based Organisms & Probiotics (Why We Need Both) 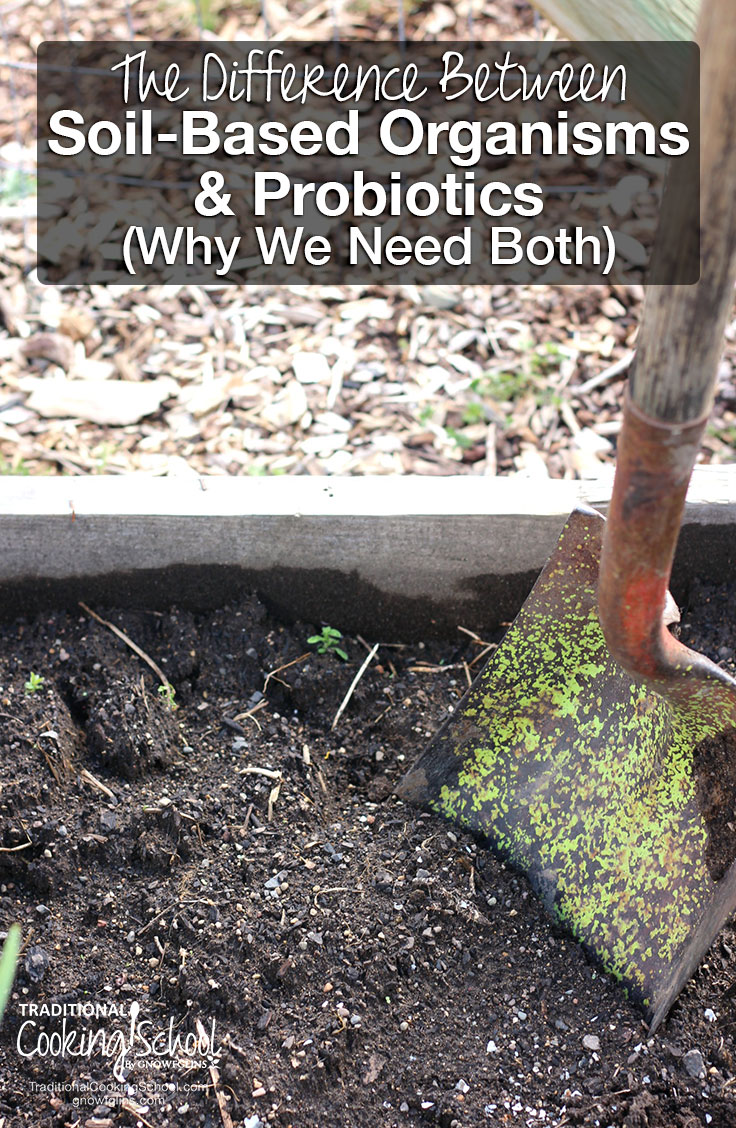 What are soil-based organisms? How do they differ from probiotics?

SBOs, or soil-based organisms, are a sub-category of probiotics. These bacteria come to life amidst warm, moist surroundings. Since they aren’t harmed by stomach acids, they travel to the small intestine. There, they germinate, or “seed”, and begin their symbiotic relationship with humans.

In other words, SBOs stick around. They stay in the intestines, germinating and reproducing (source).

According to researchers, humans carry about 100 trillion bacteria in and on our bodies. Some of these arrive via food, water, and our environment. Others are inherited from our families.

In 2010, the Human Microbiome Project delved into the world of germs, discovering 10,000 different bacteria in the human body. Each of these plays a different role in our health and wellness.

Let’s explore the difference between soil-based organisms and probiotics — and why we need BOTH!

How Do We Find Soil-Based Organisms?

Soil-based organisms, as suggested by their name, come from the earth. They don’t exist naturally in our bodies. They’re basically dirt spores!

Does this mean we aren’t meant to digest them? Not at all.

Once, when we ate food we also ate small amounts of dirt — rich in nutrients like Vitamin B12, zinc, selenium, and calcium. Now, the term “dirty” is synonymous with “dangerous” or “needing to be washed”.

Former cultures, however, ate from the earth and its soil, abundant in these microorganisms. They benefited as a result.

Unfortunately, modern farming practices such as pesticides, herbicides, fertilizers, and genetic engineering have diminished or destroyed these soil nutrients.

By intentionally ingesting a soil-based probiotic supplement, we mitigate the effect of no longer having access to as many nutrients through our food. We help build our immunity to many pathogens, much as a child playing in the dirt does.

Did you know that SBOs benefit the body for up to a month after ingestion? In addition to this remarkably ability, they also work as an alternative to antibiotics, prevent gastrointestinal disorders, and ward off infections. (Source.)

I recommend this soil probiotic!

Absolutely! Lactic acid bacteria such as Lactobacillus acidophilus are native to the human body. Our bodies benefit from floral diversity, and we should work to promote a variety of good bacteria, especially as we women pass on our microbiome to our children. Babies acquire bacteria from their mothers.

Bacterial diversity often decreases as we age, due to fluoridated water, the use of antibiotics, stress, and many other factors. Fermented foods or supplements help to offset this difference by aiding digestion, bolstering our immune system, healing inflammation, and more.

If consuming traditional probiotics, it is best to eat them with a meal. Digesting food shields them from the acidity of the stomach and gives them the best chance of survival. In particular, I recommend a multi-strain probiotic supplement, similar to what homemade ferments provide!

A healthy baby relies on diverse gut flora. We too must reach for a multi-pronged solution to repopulate the adult human gut after stressors.

Did you know the difference between soil-based organisms and probiotics? Do you try to get both?

Save Time, Spend Less, and Eat Healthy with