You are here: Home » Raising Food » Livestock & Critters » To Keep or Not To Keep… a Rooster 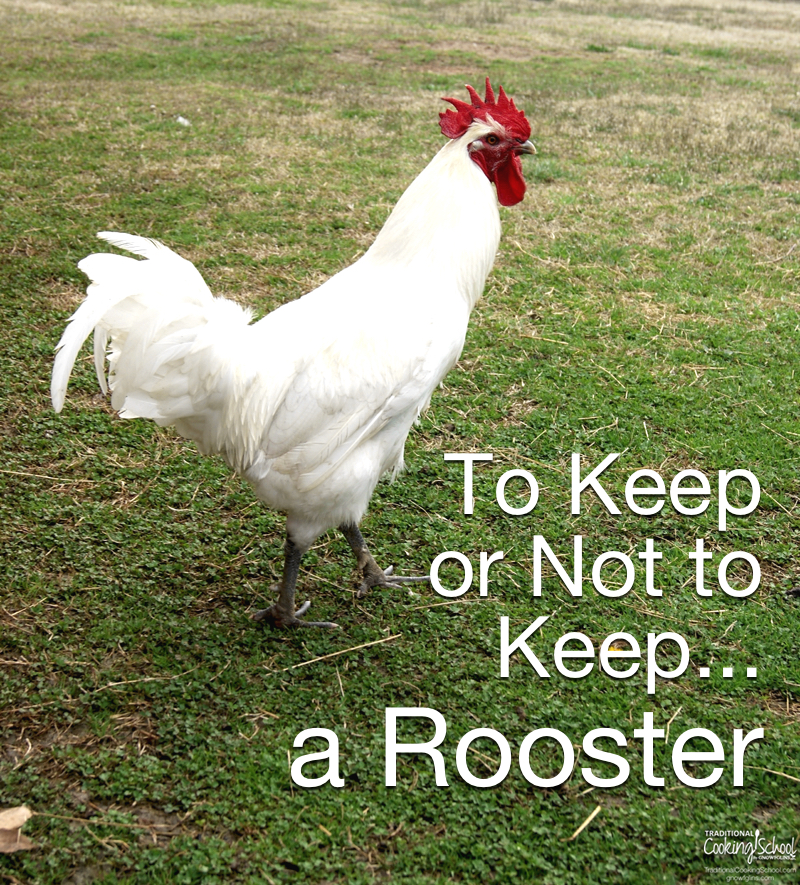 As new homesteaders who tend to become easily overwhelmed, my husband and I have a rule that we add just one new skill each year. This year’s skill is hatching our own chicks. And to do that, we need to keep a rooster. 😉

While doing our research on chickens, we heard a number of both good and bad things about roosters. On the one hand, we heard that roosters could be aggressive to the point of potentially inflicting injury to us and other birds. On the other hand, we heard that they could help protect our free-ranging hens while providing fertile eggs for hatching.

In the end, the good outweighed the bad… and we decided to give a rooster a chance. After nearly a year now, with not just one, but three roosters, here is our take on keeping a male bird.

Pros of Keeping a Rooster

In my opinion, having a rooster to fertilize eggs is like gardening with saved seed year after year instead of purchasing transplants from a nursery. With fertile eggs, hens (or an incubator, or both) can hatch chicks for you in the spring, and eliminate the need to purchase chicks locally or from a hatchery. Typically, only about half of the eggs that hatch will result in pullets. If you are comfortable culling your flock, this means you'll have some cockerels to fill your freezer.

Roosters are fun to watch.

Not only are they beautiful, but roosters have a flamboyant personality. It is great fun to watch a pen full of young cockerels come into “rooster-hood” by attempting to crow, and chest bumping to establish authority. As they grow older, they will strut the barnyard as if they own the place. And according to them, they totally do 😉 It is amusing to watch them flirt with their girls, vying for their attention while performing their mating dance. They drop one wing to the ground and dance a little jig around their prospective mate, usually while she nonchalantly picks at the grass pretending not to notice.

Roosters provide protection for your flock.

A rooster will keep a close eye on his hens while foraging and free-ranging. Any time he notices anything amiss, he will sound the alarm and all will (or should) take cover. Should the flock ever be attacked, the rooster will take on the aggressor in an effort to protect his hens, even laying down his life if it should become necessary. Take care, however, since you may be viewed as the aggressor in some cases. This brings me to my next point.

Cons of Keeping a Rooster

They can be aggressive.

Because of their protective personality, if at any time they see you as a threat to themselves or to their flock, they will charge and attack. Watch out for those spurs — they can be painful! Roosters are also territorial. They want their own ladies, their own space in the coop, their own feeders, and their own water station. If you choose to keep more than one rooster, you may have problems if they begin to infringe on each other's turf. 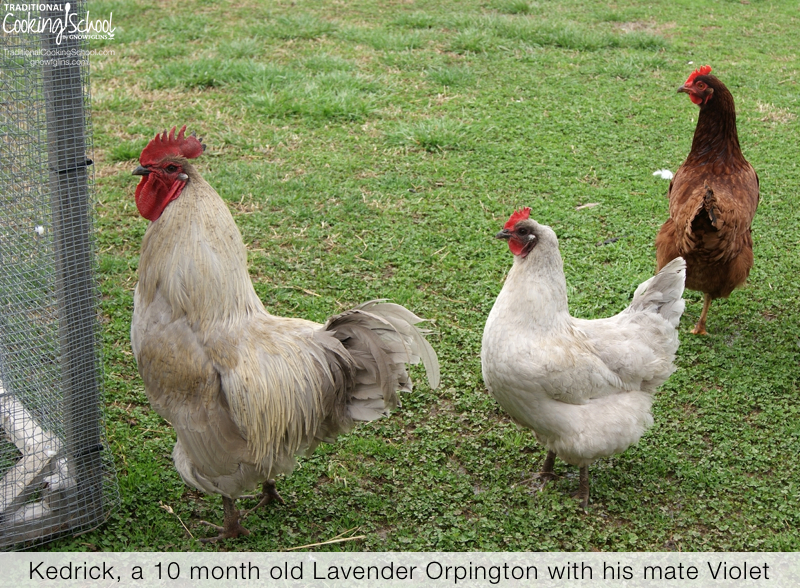 You only need a few.

If you purchase a straight run of chicks, about half of them will be cockerels, so you'll need a plan to deal with the extra ones. If culling the flock and processing them as meat birds is not an option for you, find a way to give them new homes. Most chicken keepers are likely to be in the same boat as you are, though, so it can be very difficult to find someone willing to take them.

They can be noisy.

It is a myth that roosters crow only at the dawn. They do crow at dawn, but also in the hours proceeding the dawn, and many times during the day. A crow is not just a way of heralding the coming day — it is a way of announcing to all who are around, “I am here!” So, if you have more than one rooster, one crow is often followed by several others in response. “No, I am here!” “No I am here!!!”

A general rule of thumb is about one rooster per ten(ish) hens. My ratio is actually much smaller, though: one rooster for six birds in one pen, one to three in another. So far we’ve not had any major issues. If you haven't seen roosters mate with hens, they can be rough enough to produce bald spots on the girls' backs. Chicken “saddles” can be used as protection if you can get your pullets to keep them on.

If you are going to keep more than one rooster, it is best to have separate housing for them, and a large space for them to roam. The majority of our birds free range on ten acres and each rooster has his own coop that he shares with his own hens. I credit the fact we've not had any roosters injure one another to our large amount of space. Everyone has plenty of room.

Some breeds such as Buff Orpingtons, for example, produce reportedly “gentle” roosters. That being said, gentle for a rooster can still be somewhat aggressive. Our Captain Peacock doesn’t seem to mind me as much, but he does charge my husband on a regular basis.

If you are working in an enclosed pen or run with your roosters, tread carefully.  I frequently approach mine with scratch, so they see me as a good thing. I also move slowly and deliberately, avoiding sudden movements that can be seen as threatening, and I avoid handling my hens if the rooster is nearby.

Do you keep a rooster? What breed? What are some tips you would give to a new chicken keeper?