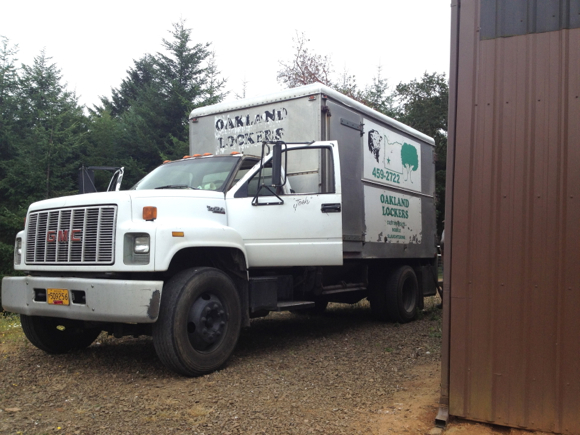 We find as time passes that we hit more and more first experiences. This week hosted a biggie — the butchering of our first grass-fed beef. We didn’t do it ourselves, though. My husband and kiddos have butchered our own goats, but the size of the beef and not being set up to do it efficiently made us confident that hiring out for it would be the best choice.

So we got the local experts, Oakland Lockers, to do it for us — both the butchering and the processing. They’re very good. We’ve gotten local beef processed by them for years. This year was different in that our own beef went to them instead of someone else’s.

I don’t think the pictures I’ve selected to show you are that gory, but… if you are at all queasy, you might want to avoid this post. On the other hand, if your children are interested in this sort of stuff, gather them ’round! 😉

Mercy was the first calf of Gracie, the milk cow that I let go in June. Born December 2010, she was half Jersey and half Red Angus. To us, she seemed quite big and she just grew and grew and grew all along. So we had good hopes for her turning out well, but didn’t really know as we had no other cow for comparison. 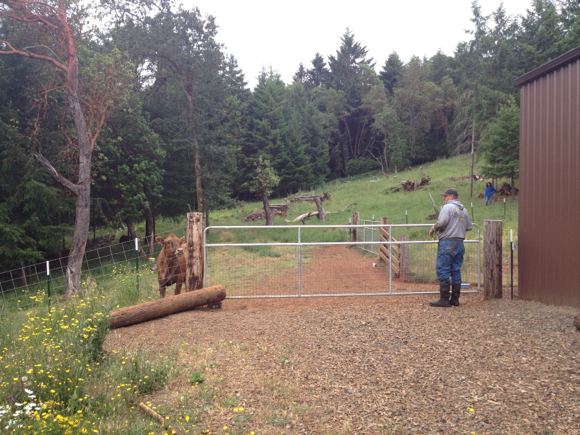 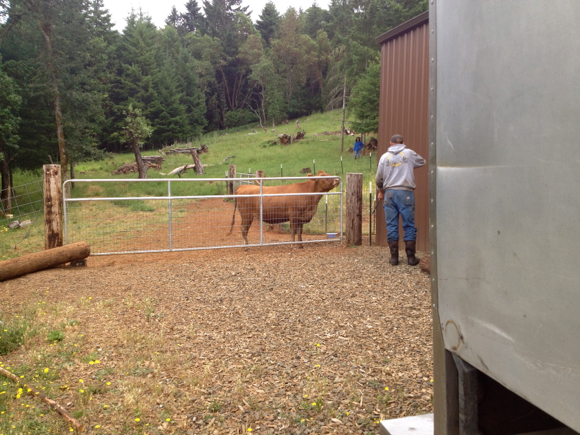 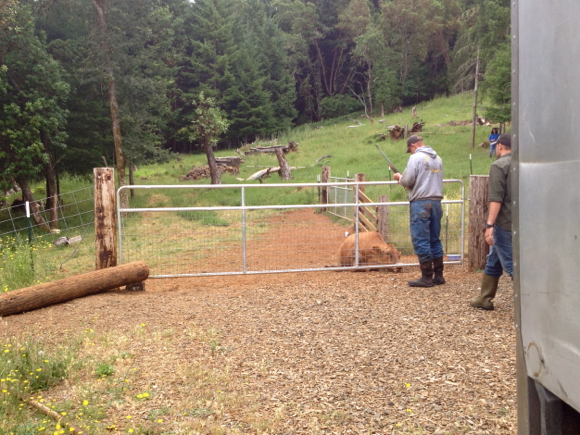 They dragged her over to the truck, turned her over on her back, cut off the hooves, and began skinning her. They only skinned the belly and legs, leaving the skin on the back to act as a protection from the ground. You’ll see that everything they do is so clean and so efficient. 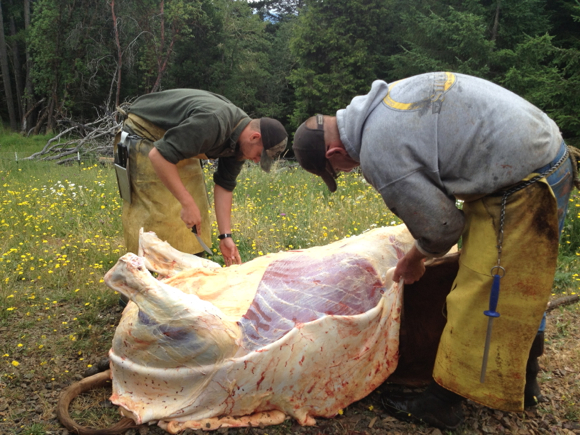 They constantly sharpened their knives. Very nice knives, too. (Victorinox? My husband just got some of those for butchering goats and small game. They’re awesome.) 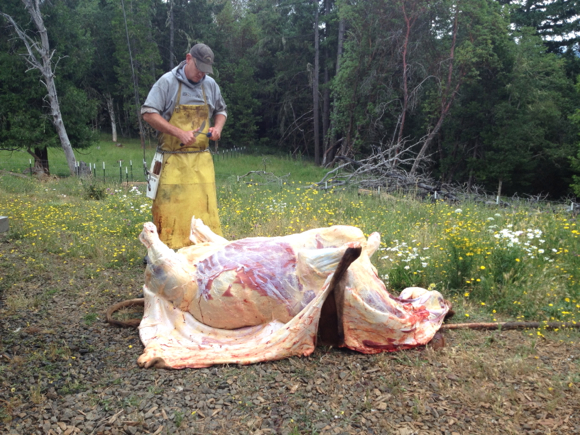 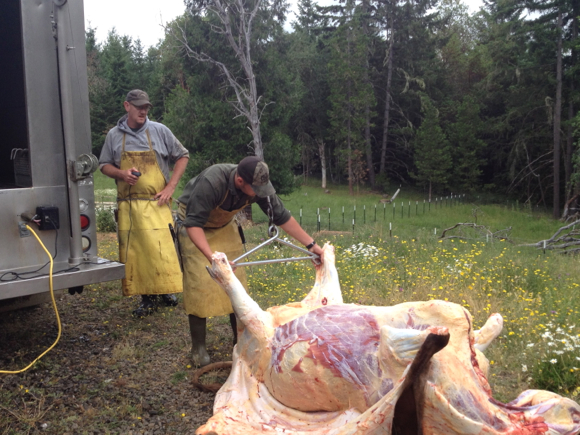 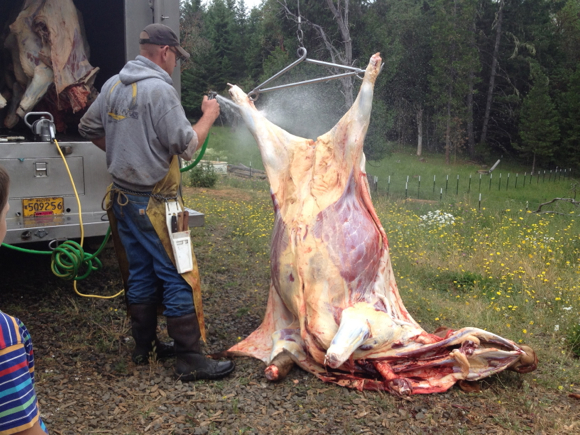 The knives. I took this shot for my husband who could not be present (he was at work and couldn’t get away). 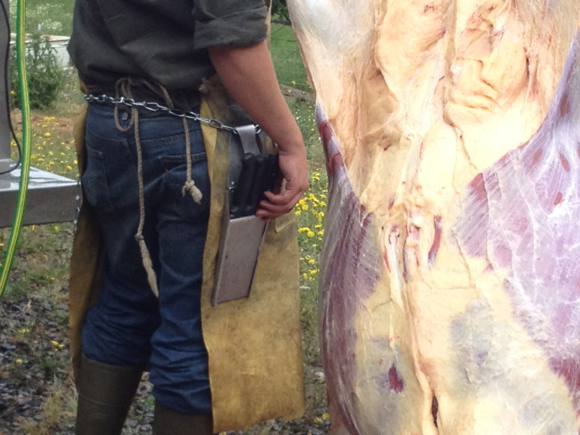 My son C. and his two close friends. They pulled in to visit just when Josh shot Mercy (they heard it in their car). They’ve seen this done before, because they’ve had Oakland Lockers do their slaughtering on several occasions. Still, they were very interested and enjoyed every minute. As boys will! 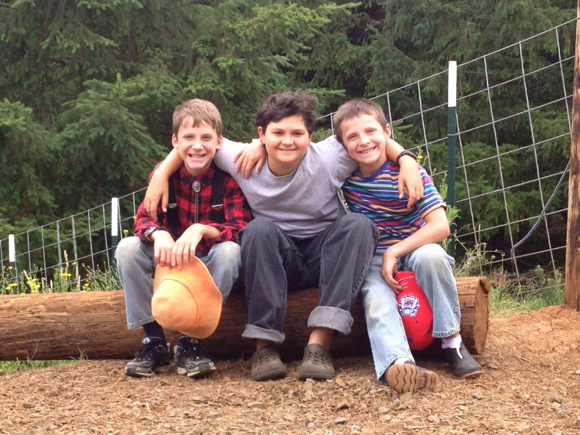 The girls sat on the fence posts. They look really sad, but they did fine. They were not sad. They thought they would be, but then said it wasn’t so bad. They’ve butchered goats, ducks, and chickens before, and this was much the same though larger scale. 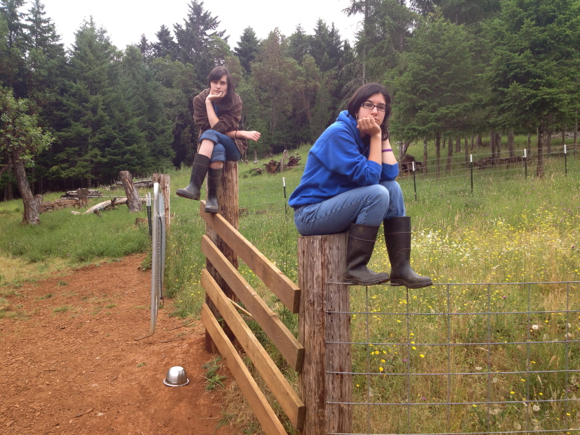 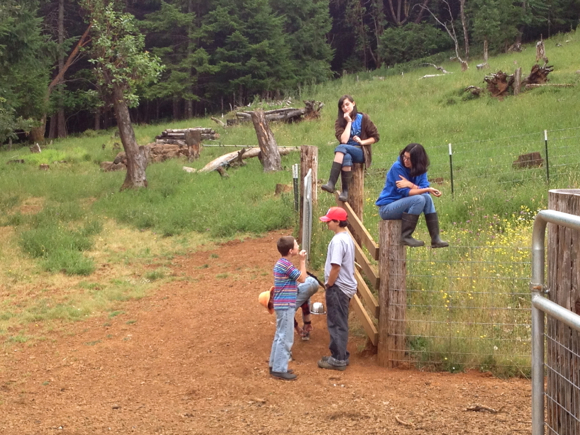 And here’s the kids’ view so you can see what they were seeing. 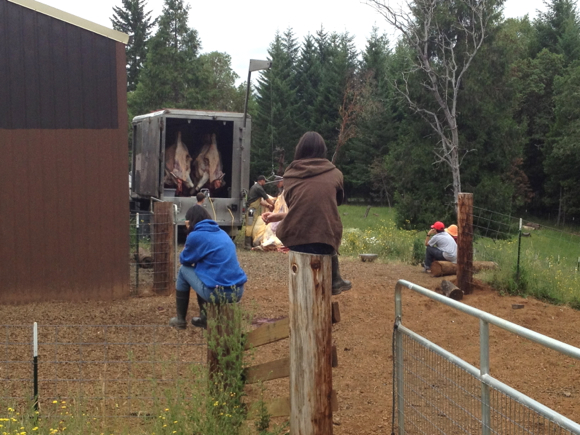 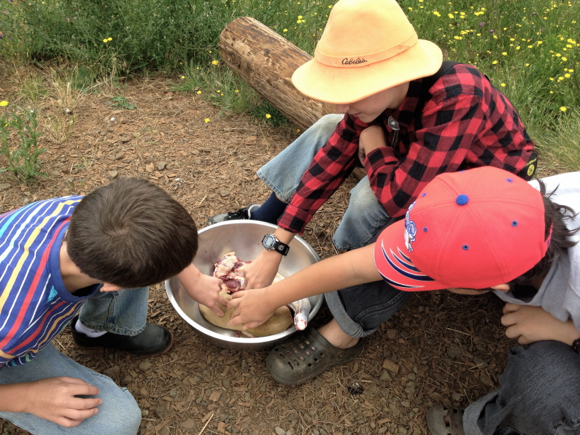 She’s entirely lifted up now and they’re gutting her. 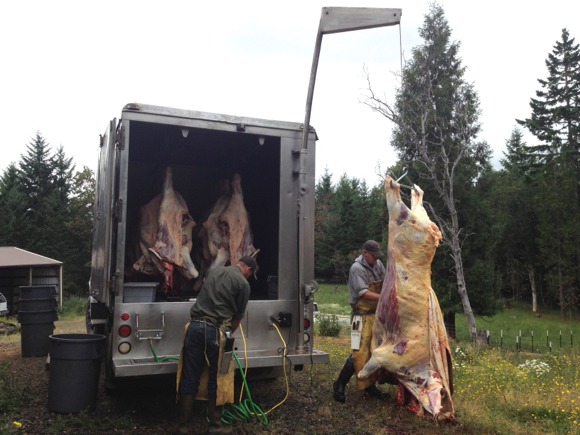 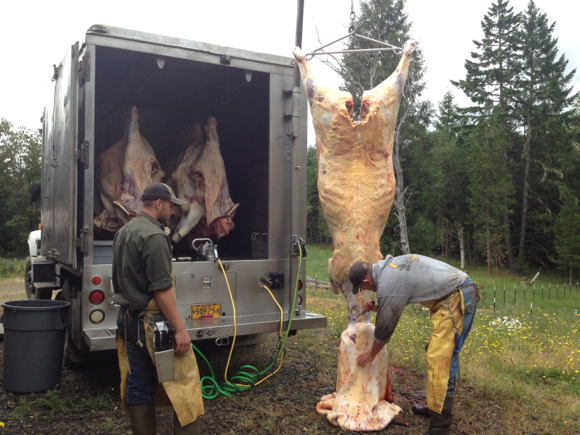 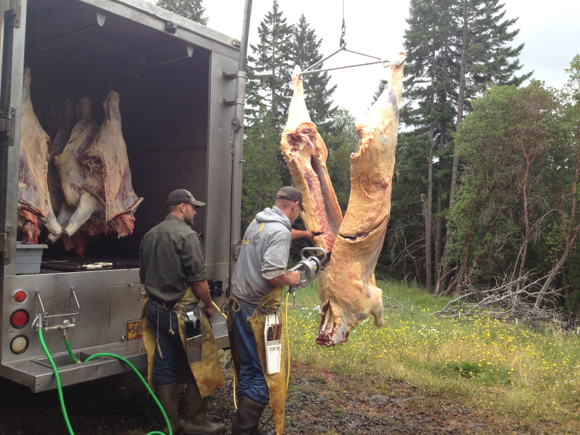 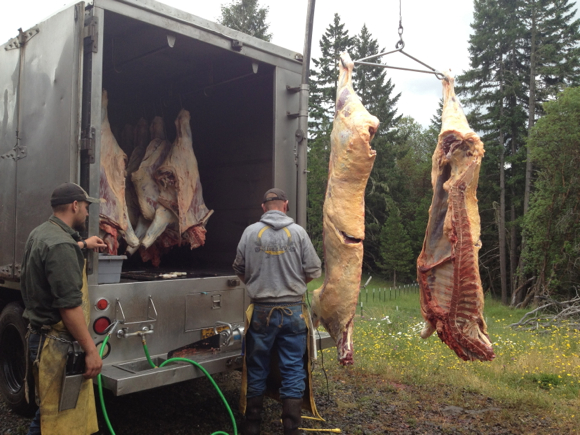 The back of the truck — spic and span. They hosed it off as needed, and hosed their boots off every time they’d get in it. I was really impressed by the cleanliness. 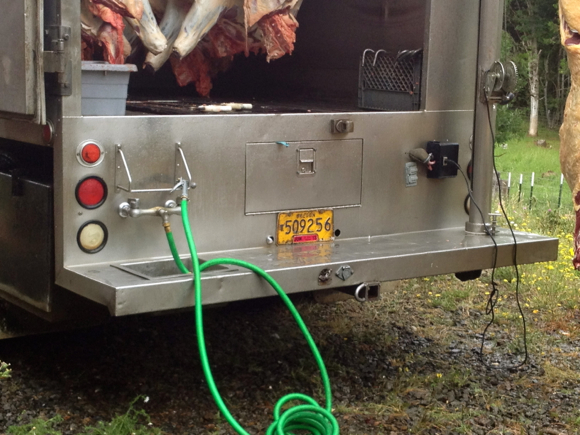 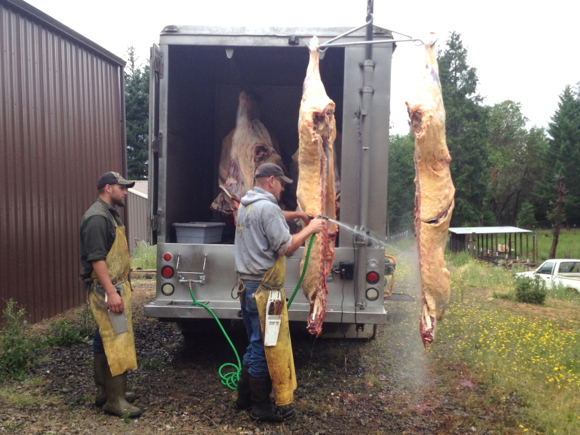 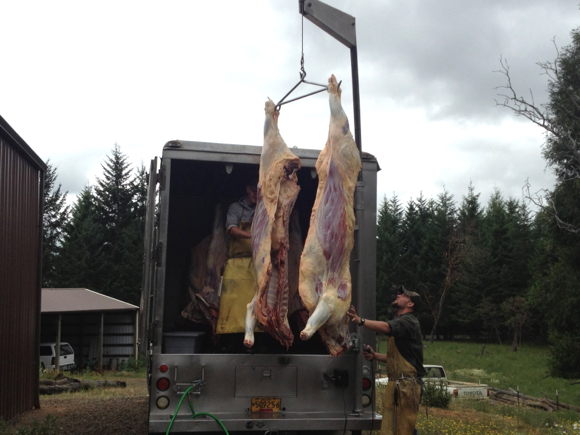 Cutting apart the quarters right in time to slide everything in. Look at the fine kidney fat hanging inside there. I’m keeping that fine fat for sure. On a pig, it is the highest grade of lard, called leaf lard. (Does this mean it is called leaf tallow on a cow?) It is going to chill up at the lockers and they’ll trim it away and package it up for me so I can render it at home. 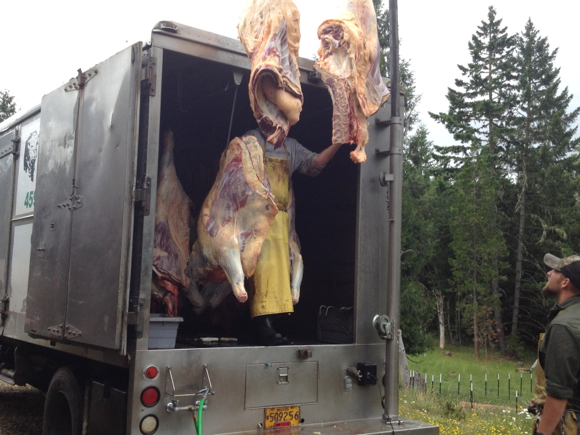 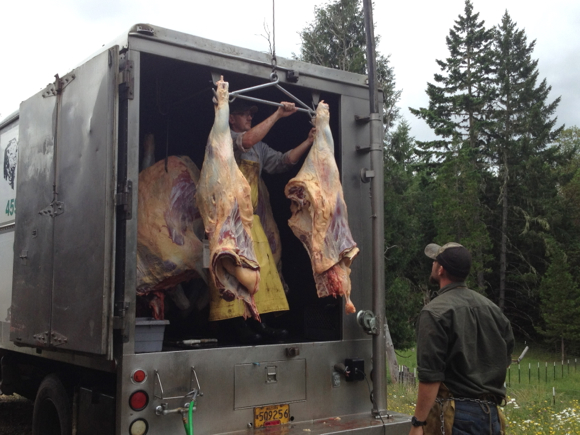 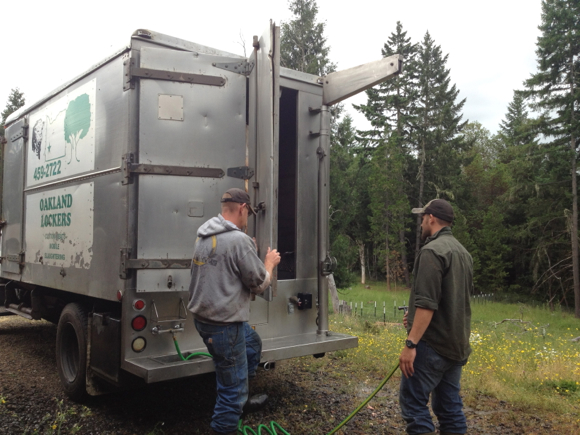 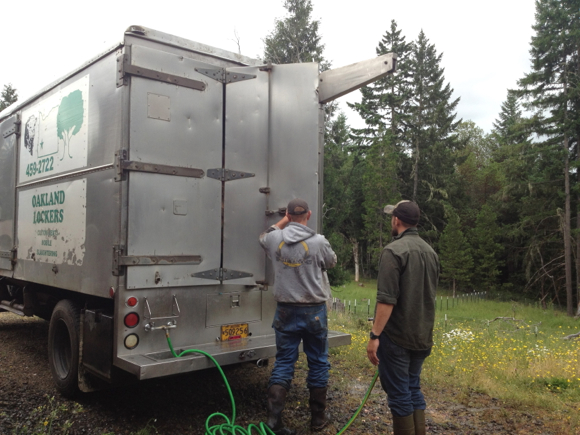 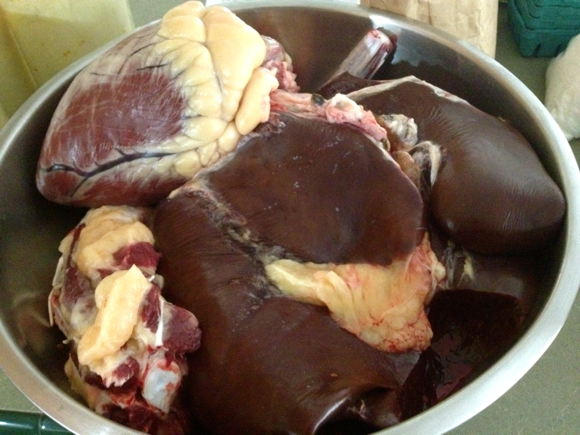