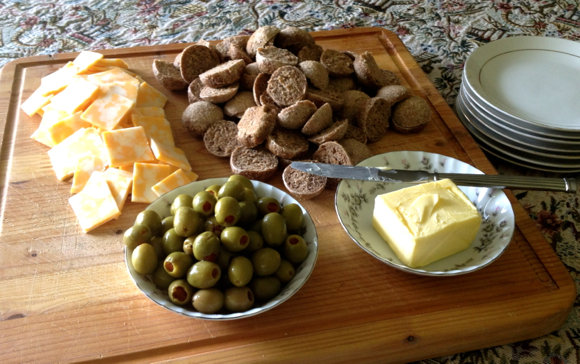 Friends invited us over for Sunday dinner. This is the family of my other friend Jamie. (You’ve met Jami who taught you to season cast iron and who made nachos with me — today you’re meeting the other one.) Jamie said she was making chili, so of course I offered to bring the rolls.

Because, you know, I’m so good at bread. Especially sourdough.

They didn’t move — they didn’t rise, didn’t warm up, didn’t do anything. At 8:30am, I had no choice but to bake them because we were headed to church in an hour. I baked them in a hot oven, hoping it would make them go “poof” — nope.

I texted Jamie: “Would it be bad if my rolls didn’t turn out and I didn’t bring them?” She didn’t text me back before we had to leave, so I packed them up anyway. I wrapped them warm in towels in a basket, hoping the warmth would soften them up. (It did not.)

I was so embarrassed to even bring them in because another family was going to be there, too (whom we had not met yet). Remember how I’m supposed to be a really good bread baker? A lesson in humility, for sure. And I thanked God for it, by the way.

She agreed they just didn’t work with chili. Like a true friend, she was truthful.

Then without skipping a beat, she said, “…but they’ll be great for a cheese board.” She got out that beautiful cutting board you see above and while A. cut the pellets in half, I sliced the cheese. We added the bowl of olives and the platter of butter. Everyone munched happily.

Problem solved. Quite deliciously, and all the credit goes to Jamie’s creative and frugal nature to make lemonade out of lemons. Or in this case, a cheese board out of hard little pellets of sourdough bread!