You are here: Home » Simple Living » Preparing for an Emergency 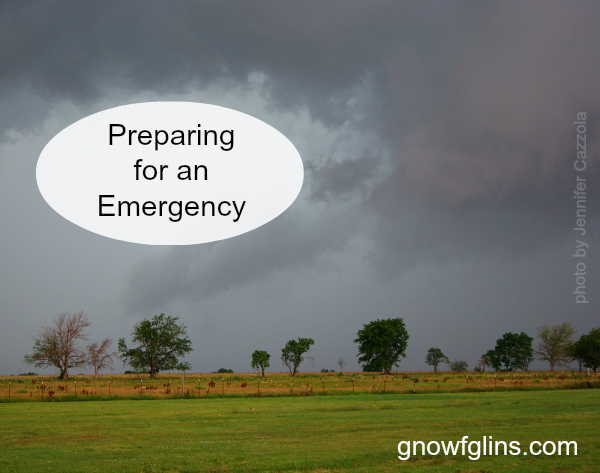 Having been born and raised in what is known as “tornado alley” I should have been much more attentive to the weather that evening, but I was focused on just one thing: getting dinner on the table on time. My husband, on the other hand, was very concerned and had walked out to the back yard to take a look at a heavy black cloud stretching across the sky.

He was “new” to Oklahoma, having moved here when we married nine years ago. Up to that point, tornadoes were not something he had really experienced. When the weather acted up as it often did during the warmer season, he was usually the first to notice and express concern.

Since I had spent many a stormy evening crowded in an inner hallway with my family only to emerge from every single event unscathed, I saw the whole thing as a nuisance and was more reluctant to take shelter unless it was absolutely necessary.

In my mind absolutely necessary meant a blaring siren, and since there was none, I continued  with dinner prep.

“Jen, this cloud… it looks like it's rotating. This doesn't look good, hon…”

I popped out the back to reassure him that there was nothing to worry about. Yes, it had been raining, it was due to storm more but there had been no reports on the radio, no warnings issued, and the sirens were silent.

However, I had never seen anything quite like this. The cloud stretched from east to west as far as I could see, and was nearly pitch black. It wasn't still, it was beginning to churn, particularly at the southern edge where it nearly touched the horizon. I began to notice a black vapor that appeared to be rising from ground spiraling upward. He noticed it too, but I offered that perhaps it was smoke from someone burning trash.

As soon as I had said this however, the great cloud put down a finger that united with the vapor, forming a funnel that touched the ground. We had a tornado. We were later to learn that it was in fact some miles south of us — but at the moment, it looked as if it was in our neighbor's pasture.

I have never felt a fear like I did the moment I saw it touch the ground. The hair on my neck literally stood on end. This was just a week after the EF5 tornado hit Moore and the devastation and destruction of that was fresh in my mind. We grabbed our shoes, keys, purse and the dogs and did what no one should ever, ever do: we got in the car.

Escaping by car was not some mindless act as a result of fear. It was an act of desperation: we had no place else to go. I wish I could say that this event was the first that caused me to realize I had designed our pole barn home with one major flaw: there was no “safe” room. But it wasn't. It wasn't the second event either. It was the third. We really needed to take shelter and there was none. I had not adequately prepared for this kind of scenario.

We were blessed in that the funnel that touched down mercifully stayed on the ground for just a few seconds while the storm continued to move south, and then finally east of us. Within an hour we were back home, and dinner was on the table. 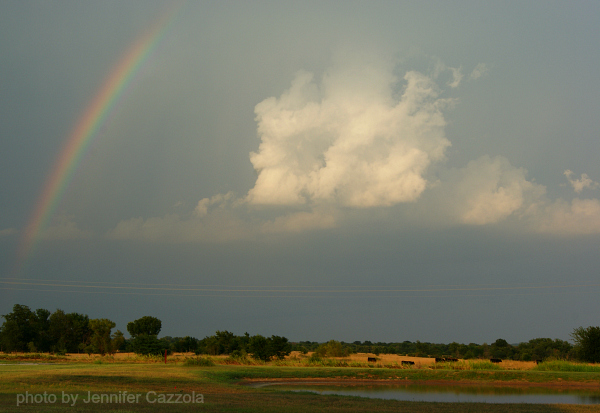 This event gave us a needed push to get better prepared for emergencies and natural disasters. After debating a storm cellar for several months we finally decided that um, yes we do really need one and have made arrangements to have one installed later on this year.

Here are some additional steps that we have thought through as we have worked to become better prepared, and ones that we would recommend:

1. Know what sort of emergencies are common for your area.

For us in Oklahoma, tornadoes are a possible emergency, but each area is different. What is something that you can realistically expect  might happen where you live? Flash flood? Earthquake? Forest fire? Some less drastic events could happen that still require preparation, like power outages, drought, and ice storms. Think through these events and make a list of what you would need and what actions you would need to take in order to be safe when they happen.

2. Know the signs and signals of those emergencies and be prepared to take action on your own.

Even though the sky was dark and dangerous that night, I felt we were safe for the simple reason that the siren wasn't sounding. I was relying on the news and weather service to let us know whether or not we needed to take shelter. This was a big mistake.

We live in a rural area somewhat off the beaten path. The funnel was not reported until some time after the fact. Had it been closer, moving faster, or on the ground for longer, we could have paid dearly for this oversight. From now on, we plan to watch the weather on our own. We still plan to utilize the radio but we will also be looking for signs of danger and taking shelter whether or not the weather reports say it is necessary.

3. Have both a safe place and a grab-and-go bag ready.

Once you have identified your emergency situation, where is the safest place you can go?  A storm shelter? An inner room or door way? A basement? Make sure that each family member is aware of the safe place and knows how to get to it. Emergency drills would be a good idea. If you plan to flee outside the home, consider packing a grab-and-go bag and have it ready at all times in a convenient location. Your bag should include easy to carry MREs (or something of that nature), bottled water, a flash light, extra clothing, and cash. Don't forget medications if you or a family member is taking any.

4. Make sure your safe place is adequately stocked and prepared.

If  your safe place is located outside the home, make sure it is well stocked in the event that you should be there for a while. Consider a radio and flashlight, along with an extra supply of batteries and a cell phone. Also consider having copies of important papers stored there, in the event your home office is destroyed.

5. Don't forget your pets and livestock.

With all the preparations you make for yourself and your family, don't forget anyone else who might be depending on you! Do you have a plan in place for pets and livestock? House pets might need a grab and go bag of their own, as well as food and water. Livestock might need an extra supply of food and drinking water stored away in the event of an emergency.

What plans have you made to be prepared for an emergency?

Traditional Cooking School is an online cooking school Wardee created to honor her grandmother’s cooking traditions and preserve them so that future generations can enjoy the health benefits, flavors and fun of traditionally prepared foods. Join 11,334 families served since 2010! Learn more here…