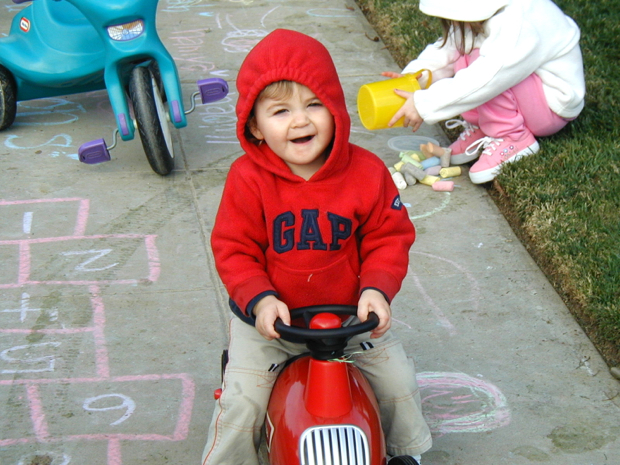 I gave birth to my son C., my third child, at home in 1999. He cried quite a bit, so we wondered if he might be in some kind of pain. He had several issues from birth, which made things all the more confusing. One of them was itchy eczema from head to toe (that's another story for another day). But that seemed unrelated to a noticeable neck weakness. He couldn't hold his head up straight, nor could he turn it side to side.

Our pediatrician said he probably had torticollis, permanent nerve damage in the neck area, and he might not ever get better. She said, “Let's just wait and see.”

Our midwife, who had been with us for two home births, suggested we see a chiropractor. She knew of one who believed so strongly in newborn adjustments that he did them for free! When I called his office and explained what was happening with C., they gave us a next-day appointment. C. was 2-1/2 months old, much of which time he'd spent crying.

I remember the appointment day so clearly. It just so happened that we had an appointment with the pediatrician right before the visit with the chiropractor. By the way, I was the only one going to these appointments; my daughters stayed behind with my mother-in-love, while Jeff (my husband) was working.

I think I should tell you that I am the kind of person that tends to trust everyone and sometimes says too much. So, with my usual naive style, I told the pediatrician how we were going to the chiropractor next and why. She was already politely skeptical about our having had two home births, our resistance to topical steroid creams for eczema, and our hesitation to immunize. Her response surprised me, but it shouldn't have. She advised that we not go to the chiropractor because she didn't think it would do any good, and she even thought it could hurt C..

I left her office and called my husband Jeff from the parking lot. I was ready to cancel the chiropractor visit. Jeff said, “You already have the appointment. Keep it. If you feel uncomfortable with something, you don't have to do it. But it won't hurt to give it a shot.” Neither of us had any prior experience with chiropractors, so we had no idea what to expect, if anything…

Click here to read the rest of this story… (I'm guest posting at Keeper of the Home.)