You are here: Home » Health & Nutrition » Healthy Living » Ticks: A Personal Story And How to Fight Back 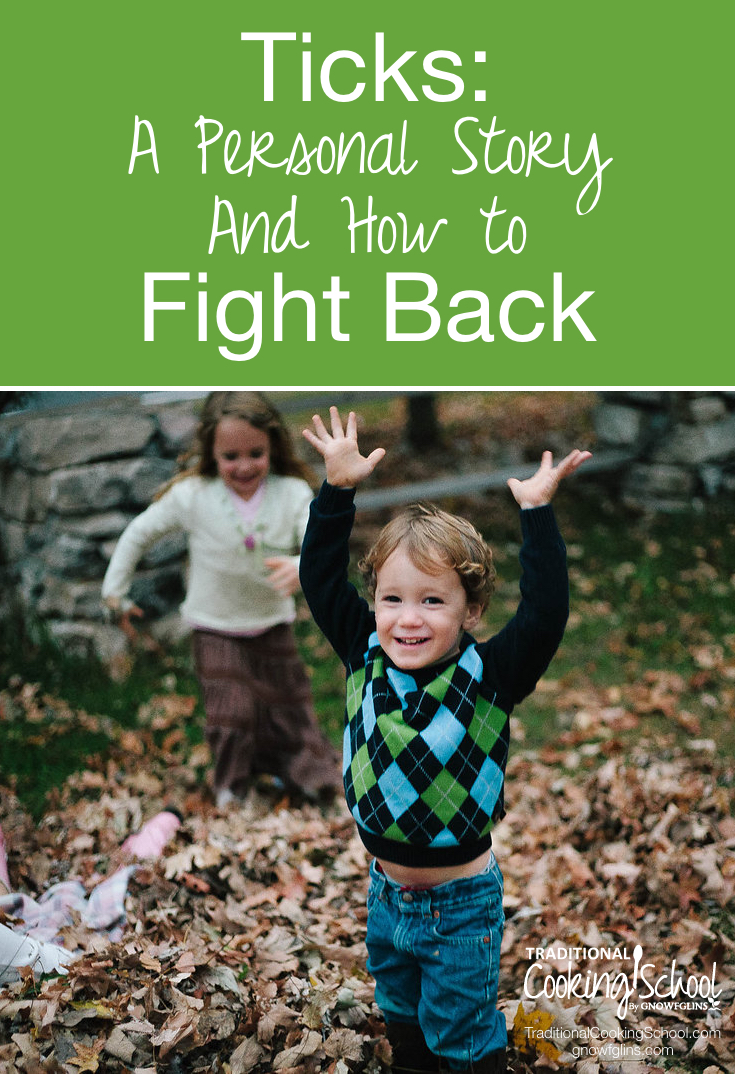 Two months ago, my wildly rambunctious three-year-old fell ill. He complained of stomach pain and ran a sporadic high fever for two days. Fearful that we were dealing with appendicitis, my husband took our son to the ER after his pain intensified suddenly on a Sunday night.

An x-ray ruled out appendicitis, so we took our little guy back home and followed up with his normal doctor in the morning. Still nothing out of the ordinary could be found. The doctor sent him home and had us monitor hydration closely since he hadn't been eating.

Tuesday brought no improvement, so we decided to explore blood testing, which revealed a severe infection with elevated blood cell counts. My sweet munchkin was admitted to the hospital, my husband by his side, and I remained at home with our other little people and nursing baby.

A few agonizing days passed. No one knew what was wrong. Doctor after doctor analyzed our now lethargic and frail little man. They pumped him with fluids and attempted to control his pain, nausea, and fever — but that was all they could seem to do. After two full days at our county hospital, the doctor said her concern warranted a transfer to the Children’s Hospital in the city.

An ambulance soon carried our son to yet another set of doctors, sterility, and bright lights. But after a long first night at the second hospital, the team of doctors concluded that our son had some sort of tick-borne illness and started him on immediate treatment.

For a few days, the roller coaster ride of his illness continued with extremely high fevers, lack of food consumption, and overall listlessness. But then one night, the fever subsided a bit, and with the morning light, a bit of color flashed upon his pale, sunken cheeks.

A little bite from the mouth of a wretched tick brought about this entire ordeal. Yet today, two months later, because of God's providence, I have the privilege of watching our rascally, curly-haired boy running around in our fields once again, chasing fireflies and trying with every breath to catch the terrified barn kittens.

By the grace of God, he has recovered with no long term effects so far — besides the emotional impact of the experience in his little three-year-old mind.

We live in the country amongst the ticks, bugs, spiders, and many other things, seen and unseen. Do I panic every time I see a tick now? Am I led to use DEET or another harsh chemical to prevent this from happening again?

No. There are no guarantees with even DEET, and this type of illness is rare to begin with. I am, however, much more proactive now. When we notice an increase in ticks, we perform our bedtime ritual of “tick checks”. In addition to our tick checks, I have also been busy finding a great natural tick repellant for my family.

I have come across many different recipes and secrets so far, but I haven't decided which one is best yet — not enough time has elapsed. But here are a few of my favorites, based upon ingredients I have on hand and usability for my family. Ages range from parents all the way down to babies.

I also add almond oil to all of the above recipes, since it is rumored by the folks here in Tennessee that ticks do not like the sweetness or sulphuric properties of this oil.

I look forward to sharing our results with these concoctions after a full summer of experimentation.

Have you had any success with natural tick-fighting repellants?