You are here: Home » Raising Food » Livestock & Critters » Learning Together: My Adventures in Raising a Livestock Guardian Dog 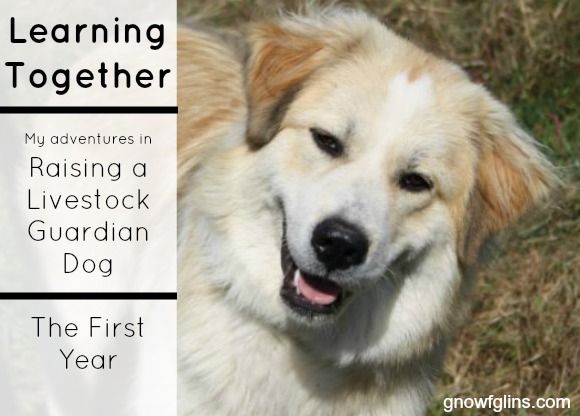 The following is not intended to be a tutorial, how-to, or training manual. I am simply sharing my experience in raising my livestock guardian dog (LGD) puppy, along with a few good resources that I’ve used along the way. –Lindsey

January 5th marked one year since Mindy, our Great Pyrenees/Karakachan dog, came to live with us at Hickory Cove Farm. I thought and prayed about getting a livestock guardian dog for quite a while, and had joined a few Facebook groups that specifically focused on LGD-raising as a way to “get my feet wet”. I thought that I would sit back and observe, read others’ tips and stories, ask a few questions, and keep an eye out for an available puppy with the right price and location. 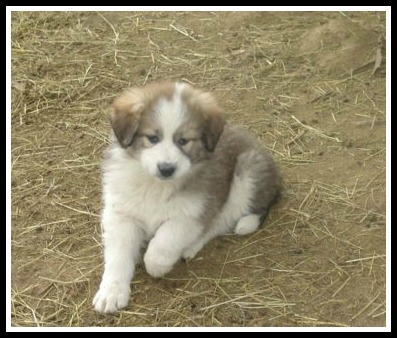 Then one day, this picture showed up in the group, and I melted. An 8 week old fluff ball, the last of the litter, located in Tennessee. The price was right. The location wasn’t the most favorable, but that could be worked out.

I sent a message to the breeder, Myron Stephens from High upon the Mountain farm, and told him that if I could find a way to get her from Tennessee to Pennsylvania, I’d take her.

Myron told me about the Small Animal Transport group on Facebook, so I posted a request in the group. Within a day or so, I had a response from a lady doing a transport run all along the East Coast, and with that final detail worked out, I suddenly went from someday-dreams of having an LGD to having one on her way to me.

We spent the week getting ready for her arrival and setting up a pen for her in the barn. 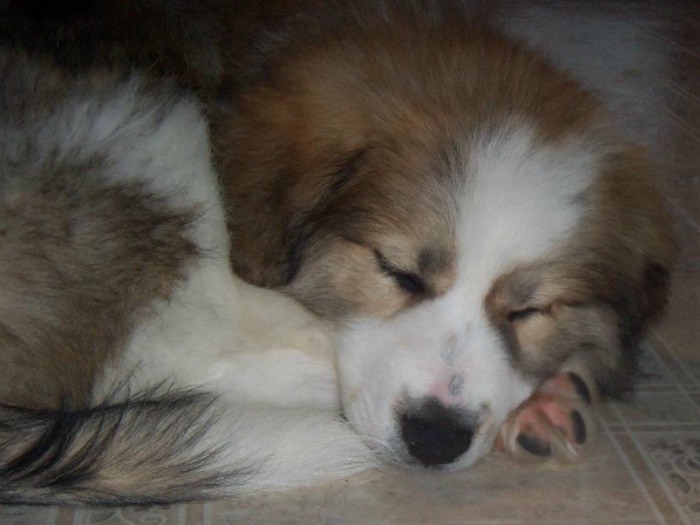 She arrived late at night, and spent her first night here in a large crate in the house. The next day, at Myron’s suggestion, we gave her a bath to wash away the scents from her birth farm, dried her off, and then it was time to move her out to the barn. She was well-behaved when she first met the goats, which is a good thing, because the goats sure were scared of her! 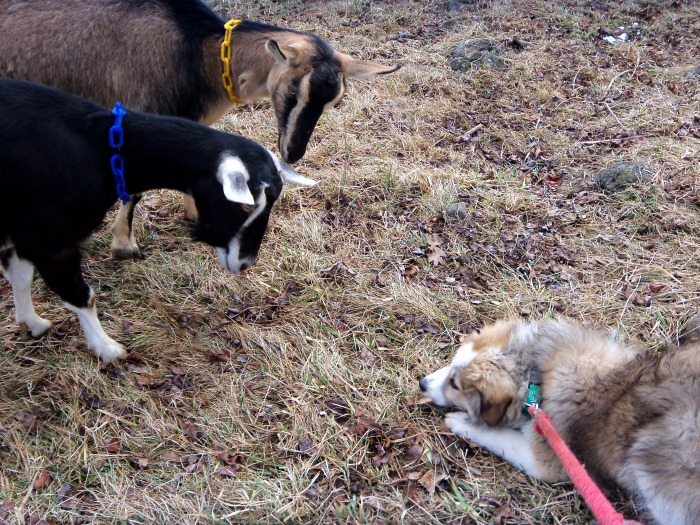 We set up a pen for her in the barn so that when we weren’t supervising her with the goats, she’d still be able to see them, touch noses with them once they were brave enough to let their curiosity get the best of them, and bond with them. 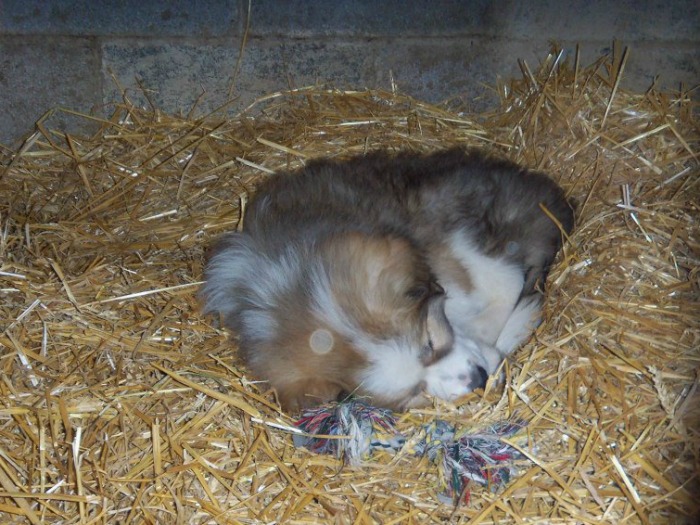 First, I must say that I’m not a fan of the “hands off” approach to training a LGD, as I believe that the dog can and should be well-socialized and bonded to their owners, as well as to their stock. Mindy is not only a protector for the livestock, she’s my dog — my companion.

In the early days of her puppyhood, we spent as much time running in the pasture and playing together as we did in training sessions. I actually found it worked best when we spent 15 or 20 minutes playing together before going in with the goats for awhile, as it helped her to burn off some excess energy. 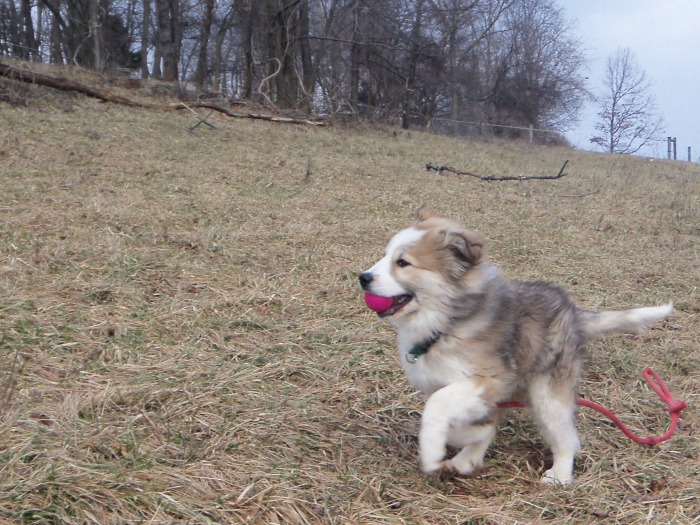 After our playtime, we got to work. For the first several months of training, Mindy was only in with the goats when I took her in there, and she was always on some sort of leash, either a regular, short dog leash or a 30-foot line, depending on what we were doing.

At first, we worked on just being still while the goats got used to the dog being in their space. Then, we’d walk slowly through the group. I would watch Mindy’s body language for cues of submission and bonding (ears back, head down, showing her belly, licking the stock) and made sure to praise her liberally when I saw her doing a good thing.

Eventually, we moved on to the next phase of training, where I’d take her into the pasture, drop the end of her leash, sit, and observe the goings-on. It has been fun to watch her natural instincts blossom.

One of the most often recommended ways of training a LGD to behave with the stock is to verbally correct them when they start to chase, and immediately take them to their pen. Eventually, the dog will learn that not only will they get to be with their charges when they behave, but undesirable behavior means swift and sure time-out. This is the method I chose to use as well.

Mindy went through phases where she spent a whole lot of time in puppy jail… Though it was hard for all of us, I knew it was a normal part of her two-year-long puppyhood. According to my reading, there are three or four regression stages that a LGD puppy goes through as they mature into a working guardian. These regression stages have been frustrating for sure, but each time she goes through one, she comes out of it a better dog than she was before.

During some of this time, Mindy wore what is called a dangle stick around her neck. Made out of a length of PVC pipe, two eye bolts, and zip-tied to a collar, this device dangles in front of the dog’s chest. The main purpose of this is to function as an anti-chasing device, because it taps against the dog’s chest when they run. They don’t like this, and it doesn’t take long for them to figure out that they can stop it from happening by simply not running. I like that it provided an immediate consequence, and that she basically taught herself not to chase the stock.

Although Mindy has grown in so many ways in her first year here, her training isn’t quite over. She still has one more year of puppyhood, and I expect at least one more regression stage. She’s still learning that the barn belongs to the goats, not her, and that she needs to allow them to come down from the pasture, get a drink, munch hay, and lounge. She’s not yet with the stock full-time, and has not yet spent a night with them without being tied up or penned. But she’s learning. I’m learning. And together, we make a good team. 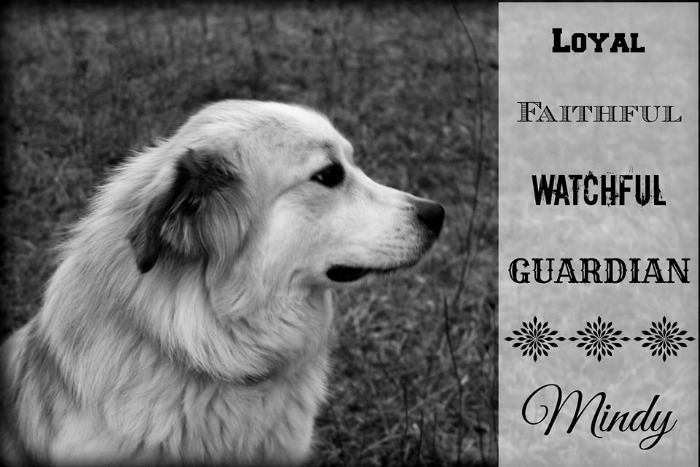 UPDATE: Shortly after publishing this article, we welcomed another LGD onto our farm. Duke is a 6 year old Maremma/Anatolian Shepherd mix who has spent his whole life with livestock. When his previous owner sold most of her sheep herd due to her upcoming marriage and move, Duke was left without a job on their homestead, and we were more than happy to give him a job here. He has done a great job of both guarding our livestock and taking over my role as Mindy’s teacher, and they have grown to be a perfectly matched, well bonded team of livestock guardians

There’s no way I would have any idea how to handle and train a LGD without the following resources! I’ve found them all to be a great help.

Learning About LGDs — This Facebook group has been a great place to ask questions and gain knowledge by reading posts and comments. The files section contains a wealth of information, and the cute photos are a fun plus!

LGD Help — This is the Facebook group where I first saw Mindy’s picture. Like the Learning About LGDs group, this one is a great place to watch and learn. Again, make sure to check out the files section because there are lots of gems tucked away under that tab!

Livestock Guardian Dogs — While it’s not the easiest site to navigate, this little corner of the web has great overviews on many different LGD breeds. I used it to help narrow down the list of breeds I wanted. Make sure to visit their extensive library section as well.

Livestock Guardians: Using Dogs, Donkeys, and Llamas to Protect Your Herd by Jan Vorwald Dohner — I borrowed this book from a friend and found it to be interesting and helpful. The breed overview section and training tips are extensive and very nice. As mentioned in the title, it also includes sections on other guard animal options.

Livestock Guardian Animals: Donkeys, Llamas, and Livestock Guardian Dogs to Protect Your Property and Stock by Jim Mitchell — This eBook was a recent find, and I quite like it. My favorite part is chapter three, written from the viewpoint of the author’s two Maremmas, Augie and Callie. The eBook is short, but it has good information.

Do you have a livestock guardian dog? Are you considering adding one to your homestead? If you are an experienced breeder or trainer, do you have any tips for those of us still learning?

Lindsey is a twenty-something foodie. She lives with her parents and sister on Hickory Cove Farm, a small, natural and sustainable farm in South-Central Pennsylvania where they raise Alpine and Nubian dairy goats, a flock of pastured laying hens and a few roosters, and a few beef steer. She views her country life as a great blessing and wants to help others get back to eating simply with fresh and local seasonal foods. Her favorite place is in the pasture with her goats, but she also enjoys spending time in the kitchen, photography, music, a really good cup of coffee, and blogging at The Life Of Linz.