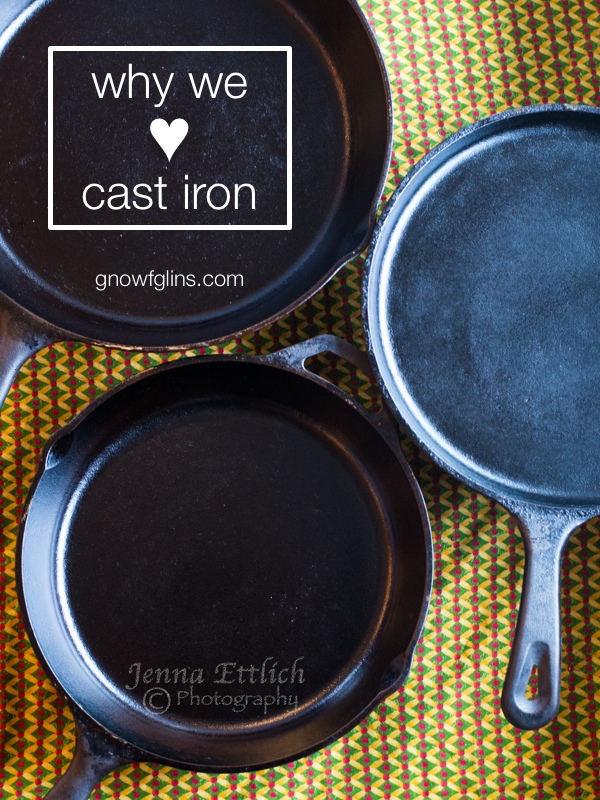 One sunny summer day, my husband spied a box of old cast iron pans at a garage sale. He purchased them, brought them home with a grin, and presented them to me as if he'd found gold.

I was less than enthused.

They were rusty, heavy, and not non-stick (at least, not at that point). Nothing compared to the shiny teflon-coated pans I loved.

But I should have known. You see, it had all started several weeks before while we were eating dinner. Travis noticed black specks in the mashed potatoes. He asked me about them.

“Oh, that's just my frying pan. The non-stick coating is wearing away.”

Oddly enough, Travis didn't like the idea of ingesting little black chunks of teflon. He did some research, and what he found encouraged him to buy the box of cast iron, rust and all, and promptly bring them home.

I tucked the box in a corner and told Travis that “one day” I'd find out how to clean them up. Several weeks passed while I lovingly cooked with my teflon pans.

But, as much as I tried to avoid the cast iron's rusty little cries to be loved and used, I couldn't. Travis's research wouldn't stop niggling the back of my mind.

Tell Me About Teflon

Teflon is the brand name of polytetrafluoroethylene (PTFE). Tests commissioned by the EWG (Environmental Working Group) showed that in just five minutes, teflon-coated cookware can exceed temperatures at which they emit toxic particles and gases linked to pet bird deaths and human illnesses.

Even more disturbing is a study from John Hopkins Medical Center. Researchers tested the umbilical cord blood of 300 newborns and found a teflon chemical in 298 of them.

Teflon Is Found in More Than Pans

And if that isn't enough, teflon is being discovered in more than pans. The non-stick coating can be found in:

Teflon Is Out, Cast Iron Is In

That box of rusty pans did eventually find its way into my kitchen. Over the years I've come to love and appreciate their versatility and benefits.

Do you love cast iron, too? What's your top reason?