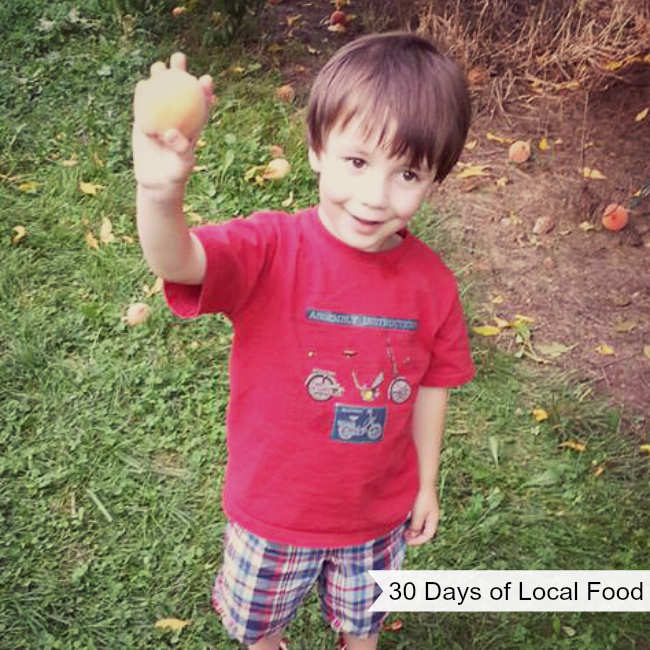 For fun, my family and I did an experiment for the month of August. We talk a lot about eating local food, and were already purchasing quite a bit from local sources — but could we buy only locally produced food for an entire month? We wanted to find out.

We talked a bit about what was allowed and not allowed just a few days before our experiment began. Here is what we decided:

The first week, we ran out of oats and sugar. Then, I forgot to put in our food co-op order so I couldn’t get oats or dried beans that we needed. I craved oatmeal, granola, oatmeal cookies, all the things we couldn’t have! We made it the rest of the month without it, but it did make breakfast in particular more difficult. We ate a lot of eggs as a result. I had honey and maple syrup and could get more easily, so we didn’t miss the sweetener too much as there were other options.

We did have to run to the store a few times, however. On one occasion we were having friends over for dinner and I was out of butter mid-week. I really needed butter for a pastry, coconut oil wouldn’t have tasted right and while I probably would have made our family just deal with the different flavor, it didn’t seem right to do that to guests. So we went to the store.

The other item we had to get from the store was milk. We have a cow share with a local farm and get a gallon of milk a week.  At first when we ran out, we got a gallon at the health food store, but the options were quite old (as in it had sat on the shelf a long time) and had traveled farther than we wanted. Because of how expensive it was and we weren’t real happy with the quality, we supplemented with grocery store milk. Right now, we can’t afford to increase our cow share and my daughter had just stopped nursing and was transitioning to real milk so our intake was increasing as well. It was the best we could do without going over budget.

Because we relied on the farmer’s market, I didn’t really meal plan. We just made sure to get a good variety of meat, produce, and herbs each week and I’d “wing it” in the kitchen. We didn’t go over budget once, either! I brought cash; when it was gone, so was my shopping for the week.

Here are a few highlights from our month of eating primarily local food:

1. You really have to speak to each farmer to see how items were raised. I bought bacon and pork chops from one popular vendor in our area that advertised well treated pigs. When I pulled out the bacon later to fry, I saw the package said “nitrates added.” We still ate it since we didn’t want to waste it, but I was so disappointed! I learned my lesson, though. I do find it a little awkward asking farmers how things are raised, especially because so many are surprised by my questions. So I tried to do my homework ahead of time and read up on websites to find out where I was happy with the farming methods and to seek those places out. I followed up in person, but since the initial research was done, I was pretty much only talking to farmers with sustainable practices.

2. We ate less meat. With summer harvest on us and only so much room in the budget we ate more meals with veggies as the main course. We stretched our meat as far as we could, eating smaller portions of it and enjoying all the fruits and veggies of summertime.  We bought a whole lot of zucchini in the abundance and enjoyed it with eggs, as a main dish in zucchini pie, and in chocolate cake. I became much more creative in the kitchen as well, really thinking spontaneously with what we had and creating new pairings. We ate like kings!

4. When doing a full grocery shop at the farmer’s market it is really helpful to bring a cart or stroller to hold bags. (By the way, bring reusable bags with you to farmers’ markets! Not all farmers have bags there for you!) I went one week with the kids but without my husband and had a really hard time juggling a full week’s worth of food from one vendor to the next. I was really missing our big stroller with the bag clip! Also, if you need high demand items like eggs, get there when the market opens. We went two hours after opening one Saturday and all the eggs were sold out for the day.

5. My husband had been struggling mysteriously with heartburn for months. Changing and omitting different foods from his diet hadn’t helped. For the entire month of August, though, he had no heartburn at all.  We don’t know what “fixed” it, but healthy, local food has countless benefits, apparently some unseen. 🙂

While I don’t think we could sustain “only local” long term because we do use coconut oil and a few other things that we can’t get in Virginia, we are continuing to eat much more local food than we were before. We would like to try this again in the winter months just to see if we can do it based on what would still be available locally.

What are your favorite local purchases? Have you or would you ever consider eating only locally produced food?

Jenny is a former public school teacher and holds a Master's Degree in Multicultural Education. She's a stay-at-home mom with two small children in Northern Virginia. Jenny, her husband, and her children began a traditional foods diet in 2009 when she found Traditional Cooking School, and they are now preparing to start a sustainable, small scale farm.