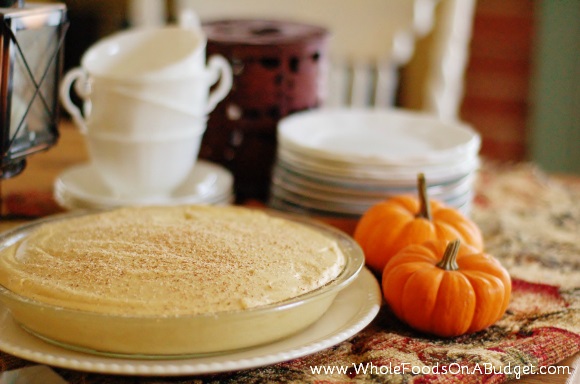 When my daughter's birthday rolled around early this fall, she wanted to have a no-bake cheesecake. We've made no-bake cheesecakes before, but always in the spring and summer when fresh fruit abounds. We've topped them with strawberries or blueberries, or like my grandmother — who used to go all out with this elaborate design that included berries — kiwis and peach halves. Those were gorgeous cheesecakes!

As I was looking at various recipes one morning, it hit me — it's fall, so skip the fruit altogether and instead add pumpkin! My daughter loved this idea, and so I worked with a favorite recipe of ours and came up with this deliciously creamy Pumpkin Cheesecake Mousse Pie.

So Much More Than Pie

One thing I love about this pie is the versatility of the filling! Don't just think “pie” here. You now have a very useful recipe that is so much more than just a pie. The texture of this pie filling falls somewhere in between a fresh, unbaked cheesecake and a mousse.

We have used the pie filling to top our sourdough pancakes at breakfast. We've also used it as a less-sugary “frosting” for birthday cupcakes — which, when mounded high, look amazing! We've eaten the filling alone as a mousse, and we've also frozen frozen it for a delicious pumpkin ice cream.

The one thing I haven't yet tried is using this pumpkin filling in parfaits. But layered with whipped cream and homemade granola, it would make some amazing holiday parfaits!

As far as sweeteners go, my recipe calls for sucanat or rapadura. Maple syrup is an alternative that would be amazing in this pie, and I'd recommend using 1/2 to 3/4 cup. If you are concerned about the amount of sweetener, it's super easy to cut it back. Just add your sweetener of choice to the filling, a little at a time, until you reach your desired level of sweetness.

If you need to eliminate all sugars, even the unrefined ones, stevia should work well in this recipe (though I have yet to try it). The sweetener does not affect the structure or texture of the pie, like sugars do in cookies, since it is never baked. The sweetener just simply has the job of sweetening. (By the way, if you give stevia a try, let me know!)

Here I offer two crusts. One is a traditional graham cracker crust, made from Gnowfglins' own graham crackers. The other is a nut crust, good for anyone but especially those of you who are gluten-free or grain-free. Personally, I think the nut crust actually knocks the recipe up a notch: in my mind, Pumpkin + Nuts = Fall Yumminess!

If you choose the nut crust (which is less sturdy than the graham cracker crust), I suggest firming the pie to aid in slicing. You can do this in two ways. You can either cut back on the amount of whipping cream that is added, using only 1 cup (instead of the 2 cups called for — keep in mind your pie will be a bit smaller), or you can freeze the pie for about 2 hours prior to serving. The pie won't be frozen, but it will be extra chilled and thus more firm. Slicing and serving will go more smoothly.

Pie For A Crowd?

You can also double the recipe and use an 11″ x 15″ glass baking dish. Divide the pie into 25 even rectangles (5 rows by 5), which again yields squares just over 2″ by 3″. When determining how much to make, just keep in mind, people may be coming back for seconds — it's that good! 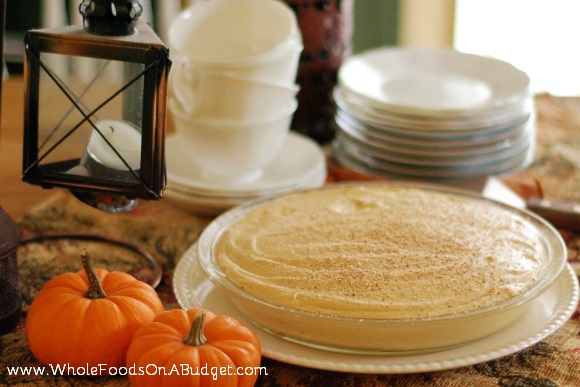 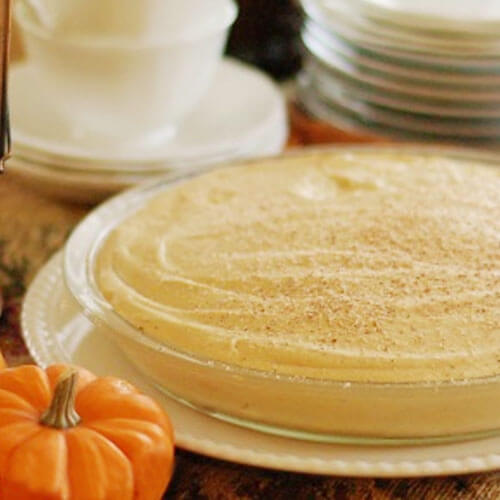 One thing I love about this pie is the versatility of the filling! Don't just think “pie” here. You now have a very useful recipe that is so much more than just a pie. The texture of this pie filling falls somewhere in between a fresh, unbaked cheesecake and a mousse.
Yields 10 servings. (The standard number of servings of a pie is 8, but this cheesecake is fairly deep and rich, and so we get about 10ish servings out of the pie.)

I like to make the nut crust from this tart, and I'd recommend using walnuts, pecans, or hazelnuts, or a mixture of the three.
Prepare the crust according to directions and keep chilled until you're ready to add the filling.

This year, our Thanksgiving feast may very well see this pie added to the spread — made with maple syrup and a nut crust — but I'm thinking it just might appear in the form of miniature parfaits.

What do you think — would your family go for parfaits at Thanksgiving? Or do you just stick to pies?

Eat what you want to eat ...like bread and butter, cinnamon rolls and cookies, meat and potatoes... because in our Bible-based cooking program we'll show you how to easily make your favorite foods healthy by God's design!

Christy is a wife and mom of four who loves good food and loves to cook. Christy blogs at Whole Foods on a Budget, where she shares favorite recipes, tips on buying quality food on a small budget, information on gardening in small spaces and ideas for natural living, with an emphasis on encouraging her readers to do what they can to make small steps toward healthier living. Christy and her sister Jessica just released a new cookbook Whole Foods for the Everyday Cook. You can find Christy on Facebook, Twitter and Pinterest.

In our Bible-based cooking program, you can eat what you want to eat ...like bread and butter, cinnamon rolls and cookies, meat and potatoes... because we'll show you how to easily make your favorite foods healthy by God's design!