You are here: Home » Health & Nutrition » Science » Why Curcumin Is More Powerful Than Turmeric For Inflammation {and what form to take} 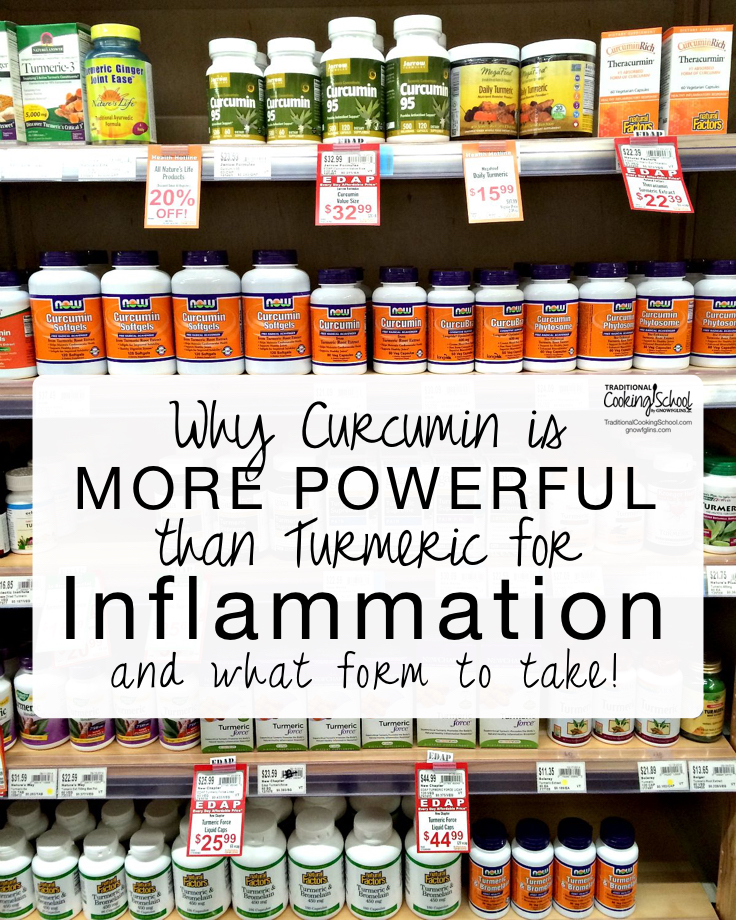 What is turmeric? What are its healing benefits? How much and in what form should I take this supplement?

I’m curious! I have Hashimoto’s and I want to put it into remission.

So, I’ve been researching. What’s up with the intriguing exaltation of turmeric over recent years?

Turmeric, if you’ve ever seen or used it fresh, looks very similar to ginger — except orange on the inside and proportionately 1/3 smaller. The flowering plant does indeed belong to the ginger family.

People in India, Pakistan, China, Japan, and even Africa have used turmeric for the last 4000 years. Turmeric aids digestion as well as helping to remedy liver and skin conditions. Somehow, it also reduces inflammation.

But can this superfood hold to its lofty reputation, even in clinical trials?

Over 3,000 medical papers have explored the subject of turmeric over the last 25 years! If the medical world has shown that much interest in a natural drug, there must be serious evidence in its favor, and serious failures on the part of the pharmaceutical world to create a comparable product. (Source.)

The allopathic community recognized the natural, active agent in turmeric as anti-inflammatory. What is the active component in this case? Curcumin — the agent within turmeric that suppresses and inhibits inflammation. (Source.)

Inflammation comes hand-in-hand with most chronic illnesses. Reduce inflammation, therefore, and you play a healing role.

Not only does inflammation causally affect cancer, but also neurological, cardiovascular, pulmonary, and autoimmune diseases too. As a result, early evidence in clinical studies has singled curcumin out as a panacea.

Drumroll, please. Let’s take a quick look at some of curcumin’s claims to fame:

Curcumin, more than turmeric itself, moderates blood sugar levels. Curcumin can even help prevent diabetes by preventing the cellular dysfunction associated with it.

Regarding asthma: “The highest doses of curcumin, but not the lower doses, significantly enhanced IgG levels… These results suggest that curcumin has potential therapeutic value for controlling allergic responses resulting from exposure to allergens.” (Source.)

Curcumin stimulates the production of bile and facilitates the emptying of the gallbladder.

“Because current treatments for arthritis are inefficient, produce substantial side effects, and tend to be expensive, natural products, which are devoid of such disadvantages, offer a novel treatment opportunities.” Curcumin offers great potential in its treatment of arthritis. (Source.)

Curcumin has also shown itself helpful with osteoarthritis, rheumatoid arthritis, and in the topical treatment of psoriasis.

In 1 functional medical study of over 2000 Hashimoto’s patients, 56% of the participants felt noticeable improvements in their symptoms from taking curcumin. (Source.)

Any Drawbacks To Curcumin?

The body rapidly eliminates curcumin. The serum concentration after oral intake of the remedy usually peaks after 1 to 2 hours, declining within 12 hours. This can mean poor absorption and low bioavailability.

This tendency has led to the exploration of adjuvants, which block the metabolism of curcumin. Going a more natural route, studies have also shown that by combining it with piperine — an antioxidant that can be found in black pepper — the bioavailability increases significantly. (Source.)

Why Not Consume Regular Amounts Of Turmeric Instead? 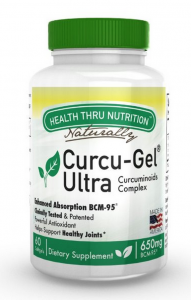 A form of curcumin called Meriva binds curcumin extract with phosphatidylcholine, a naturally occurring chemical found in many foods and a component in cells. The body better absorbs this combination than curcumin alone. Thorne, as well as other manufacturers, produce this product.

Some recent findings suggest that combining curcumin with resveratrol — a compound derived from Japanese knotweed — makes the anti-inflammatory effect greater when balancing the immune system in Hashimoto’s sufferers (source).

Chris Kresser recommends the curcumin supplement BCM-95. To quote 1 retailer of the product, “It is made of micronized curcuminoid particles combined with the turmeric essential oil and phospholipid phosphatidylcholine. BCM-95 is about 10 times more absorbable than regular standardized 95% turmeric extract” (source).

In addition to increasingly effective and bioavailable curcumin supplements (such as BCM-95), scientists discovered that curcumin is perhaps not an antioxidant as was once believed. Instead, they now understand that curcumin is actually an irritant, or a pro-oxidant.

Curcumin’s mild toxicity actually engages the body’s natural defenses. This result is called hormetic. Turmeric’s healing ability throughout history may indeed have been due to the hormetic reaction.

Just as small doses of curcumin in clinical trials are often more potent than large doses, the concept of hormesis is one of low dose stimulation. So eating a bit of turmeric, in curry, for instance, could have good health benefits.

This does not mean that it reduces inflammation. Taking large amounts of turmeric or curcumin also has not shown itself to be beneficial. However, bioavailable curcumin can indeed deliver this desired effect (source).

When used in conjunction with other compounds, curcumin relieves inflammation and regulates autoimmune responses. It is an affordable supplement and remedy for various modern ailments — and because of this, it will receive further study for treatment and prevention of chronic diseases.

Have you investigated or used curcumin supplements? For which chronic diseases? What were your results or findings?