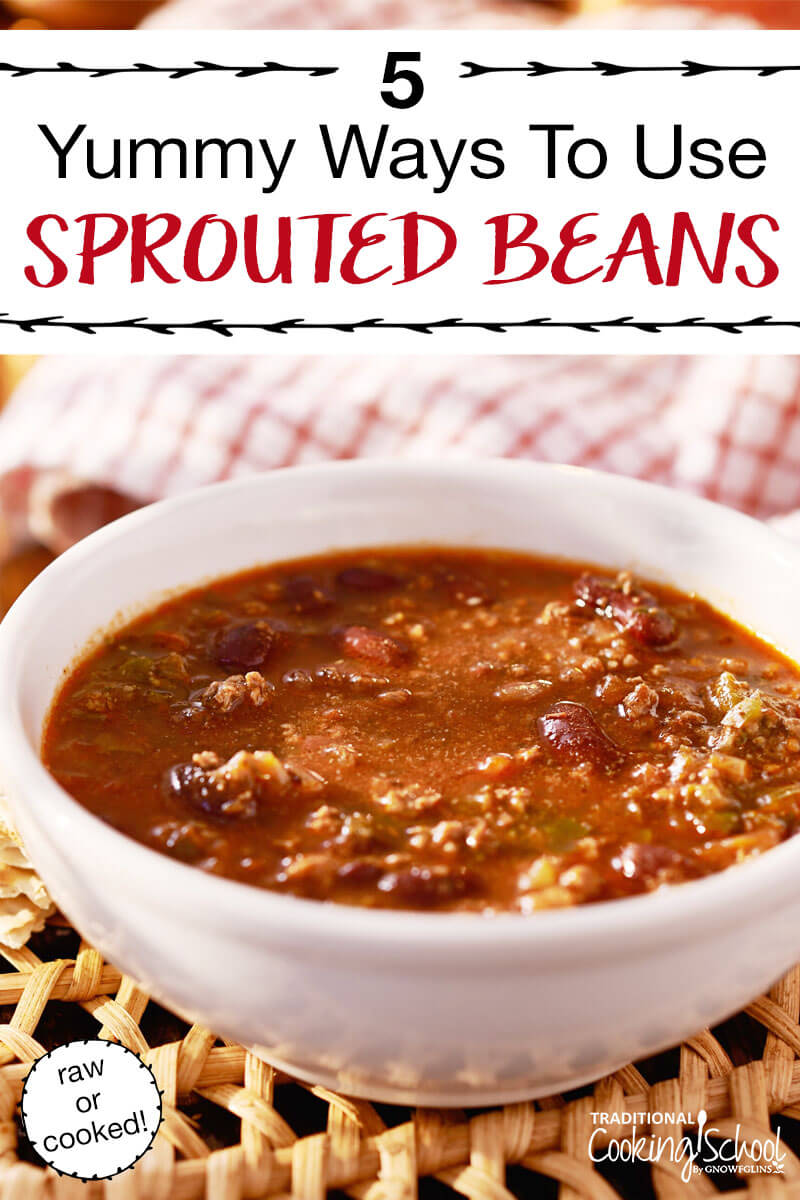 So come winter time, we do quite a lot of bean sprouting! Sprouted beans even digest as vegetables — and yield a nutritious burst of enzymes and vitamins.

According to Janie Quinn in Sprouted Baking,

“During the sprouting process, the starch molecules, or complex carbohydrates, are broken down into smaller parts, referred to as simple sugars. Simple sugars are the building blocks that make up complex carbohydrates but in a form that the body absorbs more easily. The body recognizes and readily digests simple sugars for quick energy, as opposed to starches that can be stored as fat. The [seed] sprouts, transforming itself into a plant, and we know that plants consist primarily of simple sugars that easily digest in the body in the form of vegetables.”

This same concept applies to sprouted beans, as well! So, check out How To Sprout Beans, and then read on to discover 5 yummy ways to use sprouted beans.

#1 — Use Sprouted Beans As A Topping For Salads (Raw)

Toss a handful of sprouted beans atop your salad greens. They add nutrition, crunch, and flavor. Depending on your preference, you can use mature or less mature sprouts.

#2 — Use Sprouted Beans As The Salad Itself (Raw)

Run out of greens or other salad fixings? Toss a variety of sprouted beans together with your favorite dressing, nuts, and cheese.

Other things to add: olives, diced sweet onions, and crushed garlic. Like a bean salad, only better! If you want to pass it off as a bean salad, use younger sprouted beans that are barely sporting a sprout. But older sprouts can be used in this salad as well.

#3 — Use Sprouted Beans In Dips & Spreads (Raw Or Cooked)

You can use barely sprouted beans — either raw or cooked — as a substitute for cooked beans in any bean dip/spread recipe. The flavor may be a little different (if used raw), but I’ve always found these bean dips to be very tasty!

Sprouted beans — just a few days old, with barely a sprout peeking out — make a great addition to a soup or stew. They take only about 30 minutes to cook, too!

If your sprouts are a little older, you can still use them in stews, but if you have any picky eaters around, they may be able to tell the difference. 😉

Check out our Basic Sprouted Chili!

#5 — Use Sprouted Beans As Flour (Raw Or Cooked)

Sprout, then dehydrate beans, then grind into a sprouted bean flour. Then use as a substitute in recipes calling for bean flour.

Or, as demonstrated by our 1-Ingredient Gluten-Free Tortillas, skip the dehydrating step and turn your sprouted beans directly into tortilla batter. So easy!

How do you use sprouted beans?