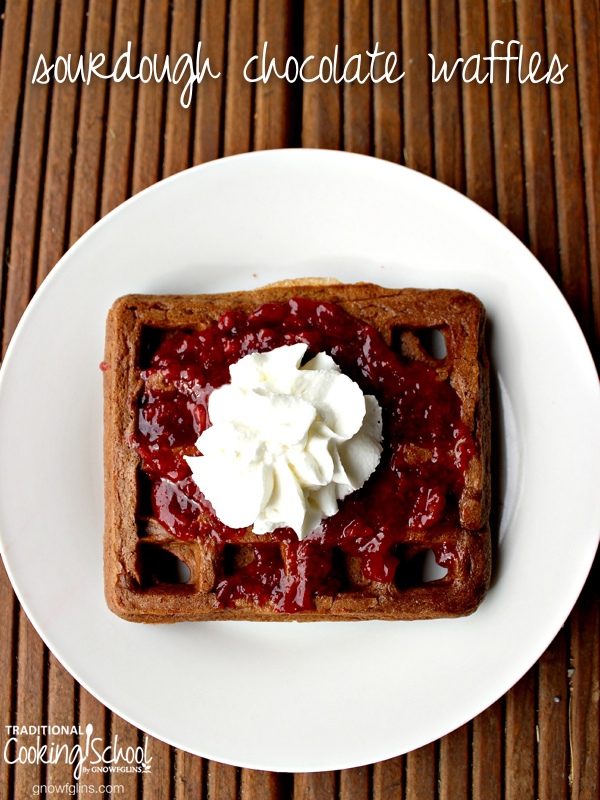 Actually, I think the waffle doesn’t get near enough credit. We see pancake that, pancake this… But the waffle holds up to toppings galore. In fact, I’ve made cornbread waffles and served them with chili… but that’s another post.

My kids will pretty much eat anything if it has chocolate in it. I even got them to eat beets in this chocolate cake with a surprise (gluten and dairy free options). I guess I just ruined the surprise by telling you it’s beets, but hey, a girl can’t keep the good stuff all to herself!

My kids sometimes wrinkle their nose at sourdough stuff. I blame it on feeding them a couple of very sour recipes before I found Wardee’s Sourdough eCourse. With these waffles, however, they were asking for seconds after the very first bite. I think the waffles would be great served up as dessert, too, but we ate them for Sunday morning breakfast before church.

My favorite topping so far is low sugar no pectin strawberry jam with whipped cream. My daughter liked the straight maple syrup, while my son wanted whip cream with his maple syrup. I believe these fermented raspberry preserves would be amazing, too. Or maybe some cherry pie filling for dessert, or a spiced pear sauce, or…

You get the picture. 😉 Put anything your heart desires on top of these bad boys. 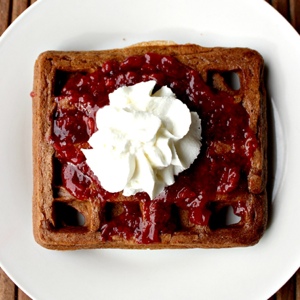 Want to freeze for later? Freeze waffles spread out on a cookie sheet, then transfer to a freezer container when fully frozen. Just take out individual waffles for busy morning breakfasts.

What are your favorite waffle toppings?

This post was featured in 30 Traditionally Prepared Einkorn Goodies.

Melissa inspires people's faith and pioneer roots at MelissaKNorris.com sharing all aspects of Pioneering Today. She lives with her husband, two children, seven cows, and five chickens in their own little house in the big woods of the Pacific Northwest. Through heirloom gardening, preserving the harvest, from scratch traditional cooking, and modern homesteading techniques, she shares how to implement the best of the old-fashioned pioneer skills into your modern life. For daily inspiration and tips, join her on Facebook, Pinterest, Google+, and catch her bi-monthly Pioneering Today Podcast.