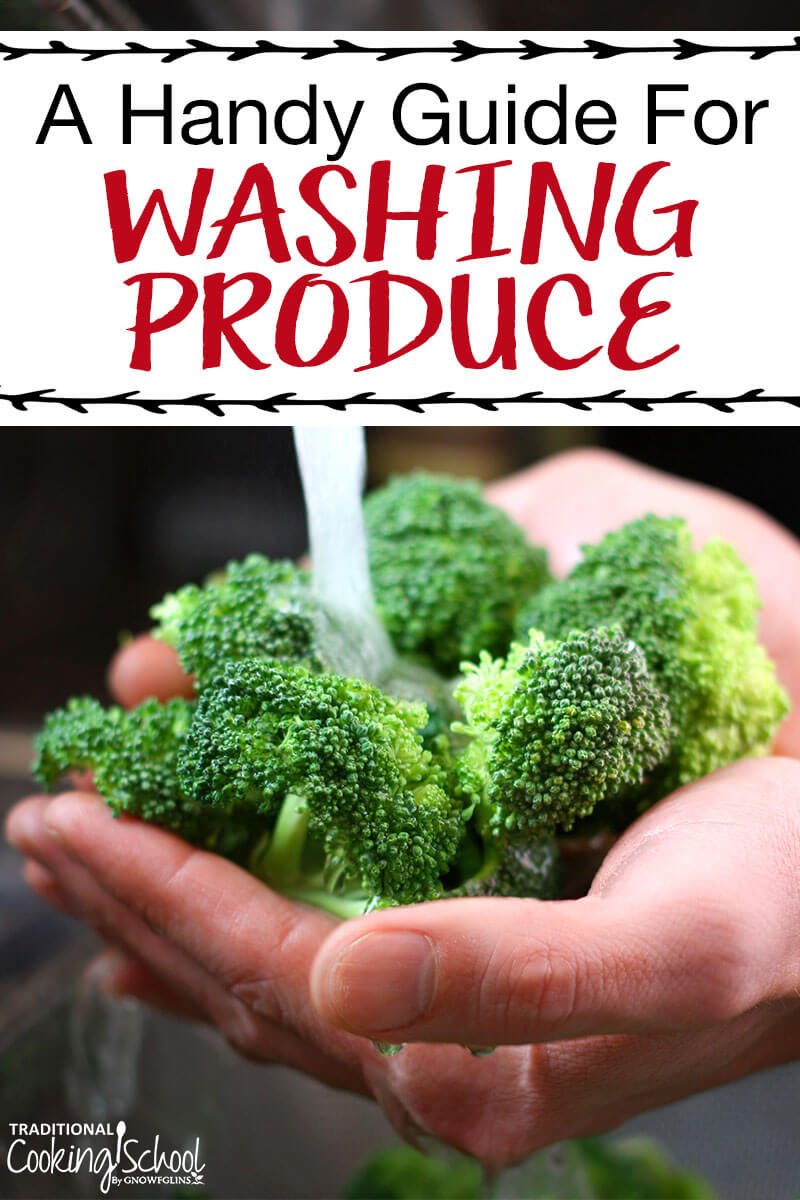 Since many of you are already planning your lovely gardens, hitting up your farmers market, and ordering from your local CSA, I figure it’s the perfect time to talk about preserving your abundance of produce!

I don’t mean recipes, or canning, or lacto-fermentation. I want to talk about the first thing you do to produce when you bring it home. Even before putting those juicy fruits on display in great-aunt Mabel’s crystal fruit bowl. 😉

Let’s talk about the best ways to wash produce!

It’s very important to clean your fruits and veggies.

Most obviously, there are thousands of microscopic organisms living on produce. Some of them — including harmful bacteria, mold, fungi, and animal waste — we shouldn’t eat.

Additionally, if you don’t grow your own food, you don’t know for sure what chemicals are on it. I normally follow the Dirty Dozen/Clean 15 List when shopping for non-organic foods at the grocery store. Since it’s likely that at least a few of the items were sprayed with pesticides, herbicides, or other toxic chemicals — I definitely need to clean that junk off!

And even if you do buy all-organic produce, certified organic farms are allowed to use some approved pesticides and chemicals. According to our own government’s regulations, these include copper sulfate, lead salts, arsenic, streptomycin, and tetracycline. I don’t know what’s wrong with compost, water, and sunshine alone! If there is even a trace of tetracycline on my apples, I want it gone!

Finally, choosing one of these ways to wash produce can actually keep it fresher for longer. That’s a big bonus! We need to make those precious, organic, store-bought goodies last as long as possible.

I hate to say it, but water isn’t enough anymore. Granny may have been able to get away with washing her green beans in water 75 years ago, but she didn’t have to worry about streptomycin or arsenic on her veggies.

Water won’t remove the residues of those “government-approved organic” chemicals, and it won’t kill E. coli or any other dangerous bacteria either.

If you’re buying imported food from other countries or halfway across the United States, there’s no telling what condition it’s in. Produce travels an average of 1500 miles before landing in the bin at your local grocery store. You don’t know if it was sprayed, how old it is, what it came into contact with during transport, if the handler sneezed on it, or how many people touched it at the store. Gross!

Hydrogen peroxide is nature’s bleach. It whitens and brightens many things — such as your teeth, your hair, your tile grout, or your husband’s yellow armpit stains on his undershirts!

I took the following photos after I washed produce in a hydrogen peroxide + water soak. As you can see — bug clusters and lots and lots of dirt. There’s also a filmy residue on top of the water that the camera doesn’t show. 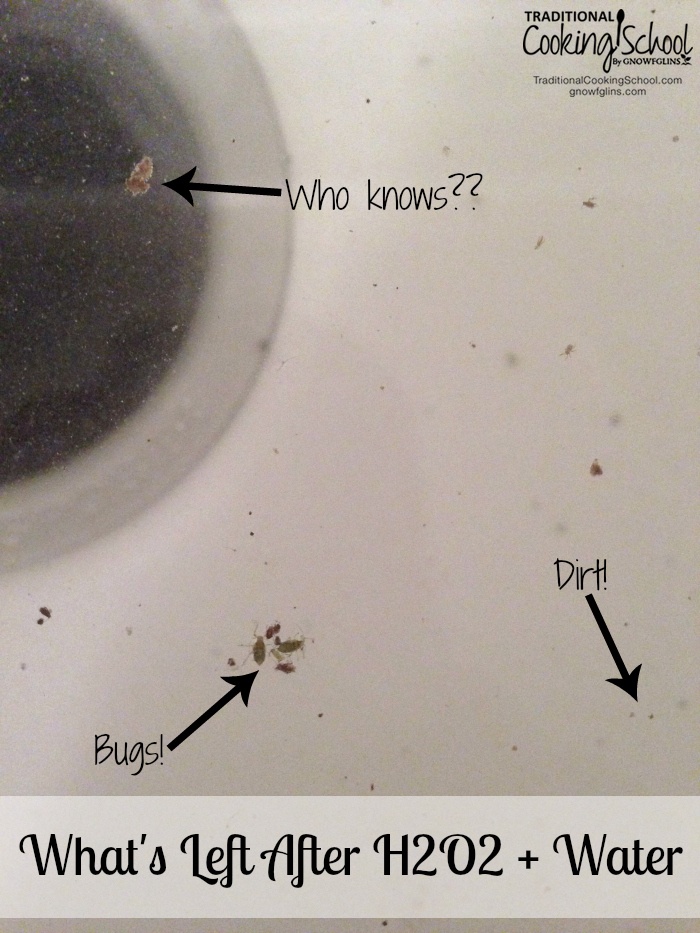 After 10 minutes or so, transfer everything to the clean water. Let it soak, again swirling and swishing it around to thoroughly rinse everything. If you don’t have a double-sided sink, just drain the peroxide mix and refill with fresh, cold water.

I’ve read mixed reviews on vinegar’s efficacy as a disinfectant. Some sources say it kills many microbial organisms, while others say it’s not nearly as effective as peroxide. Vinegar is not a “registered” disinfectant, meaning the EPA hasn’t listed it as an official disinfecting cleaner that kills harmful bacteria such as E. coli or staphylococcus.

Use a scrub brush. You may find it helpful to buy a scrub brush for produce like potatoes, mushrooms, or dirty root vegetables. You don’t need to buy a fancy scrubber made specifically for produce — any soft-bristled scrub brush will do, provided you use it for produce only and not to scrub dishes or the toilet! 😉

Invest in a salad spinner. A salad spinner is such a time-saver when drying leafy greens like lettuce, spinach, and kale. I got mine for $5 at Ikea over 5 years ago, and it’s still going strong. If your family eats a lot of leafy veggies, this is a worthy investment.

The “seven waters” cleaning method. I have a cookbook from the 1920s which recommends washing spinach, kale, and other leafy greens in “seven waters”. I understand this to mean that these greens were washed 7 times, changing the water each time, before considered clean! That’s how dirty produce could be from almost a hundred years ago, before pesticides!

So far, the only produce I haven’t soaked and rinsed are onions and garlic. I’m not sure how the thin skins would react to being drenched with water. If you try it, let me know how it works!