You are here: Home » Food Preparation » What To Do With Bitter Broth?

Have you ever made, or tasted, bitter broth?

Long-cooked broth is often dark in color — and bitter. Is it possible to salvage? Make it taste better? Less bitter, maybe?

Before we get there though, let’s talk about why the broth goes bitter in the first place. 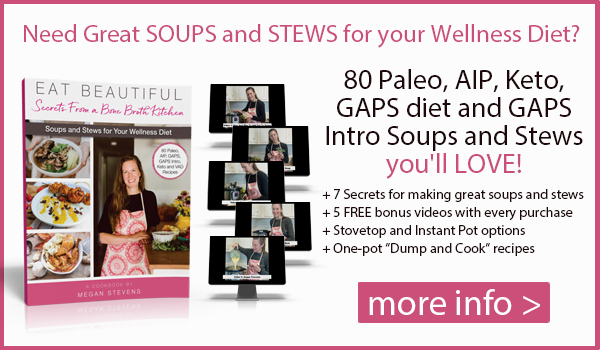 This process occurs during cooking. The longer the bones and meat cook, the more the proteases break the bonds connecting the proteins, and the more amino acids get detached (source).

It just so happens that we taste many of these amino acids and protein fragments as bitter. Once we reach this point, there’s no going back. We can’t reconnect the amino acids. Bitterness has resulted.

Therefore, the best way to fix bitter broth is to avoid it next time!

Learn how to make broth here. Avoid the longer cooking times, and shoot for a flavorful, gelatin-rich stock that cooks for just 3 hours. Or, cook your bones up to 24 hours to get more minerals from the bones. Either way, the resulting nutrient-dense broth isn’t bitter!

Incidentally, plant proteases exist as well, which is why long-cooked vegetables get bitter.

What to do with bitter broth? Make a bisque!

If you’re frugal and don’t want to discard the bitter broth, make a bisque to hide the flavor.

Steam or simmer veggies like onions, zucchini, winter squash, or peppers. Cool them and the broth slightly. Add about 3 cups each of veggies and broth to a blender. Then add flavor! 1- or 2-inch piece of fresh ginger, sea salt, white pepper… Fresh garlic, too, and lots of fresh or dried herbs.

To finish it up, add 1/4 cup butter, bacon fat, or fatty parts from a carcass (including the skin). Simply puree the mixture on medium-high speed for 30 to 50 seconds, and enjoy!

Bisques also make a great base for soups. Add meat and sauteed veggies, and create a delicious soup from a mediocre broth.

Check out this post, too, for ideas on how to add your bitter broth to a blended soup!

Have you been boiling your broth too long? How have you used bitter broth? I’d love to hear your experiences.