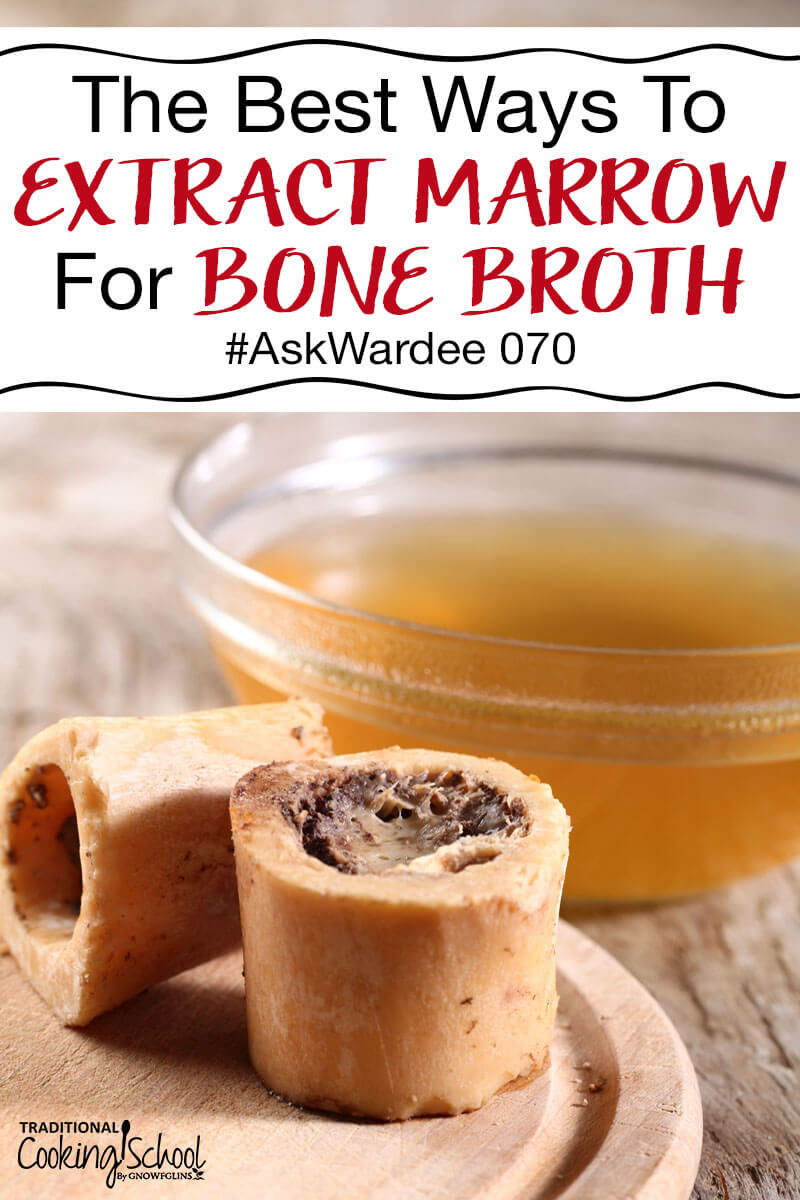 You do what you’re told — you learn What’s The Difference Between Stock And Broth? You include plenty of bones, soft tissue, and even bones with marrow when making your bone broth.

…you find some (or all) of the marrow is still in the bones — not in the broth — when it’s done cooking.

Is that ok? Should you extract the marrow or… just figure it’s all good?

Great question, Tami! Let’s talk about it today on #AskWardee.

Before I give you the quick and easy answer, let’s first get on the same page…

I happen to think it’s delicious — in fact, I will scoop out marrow from roasts and such and spread it on bread or crackers to eat on the spot. Yet there are very good nutritional reasons to include marrow in your broth.

My friend Megan from Eat Beautiful is a master at this; she creates beautiful, creamy, and thick bisques (see #4 of this post) by blending broth that’s made with fat, soft tissue, and marrow with well-cooked veggies and healing herbs and spices like ginger.

Since she doesn’t specify when this can happen, I’ll add a bit from my experience. I have been able to extract marrow just after the bones are roasted or even at the end of making broth. So, yes, Tami, you would break the bones at the end to release the marrow if it’s not already released.

If I do it at the end of broth-making, I don’t usually bang my bones on a cutting board; I tap them strongly on the side of the pot so the marrow falls out right where it’s wanted.

To get every little bit out, the best tool is… a chopstick or a nutcracker (the long thin pokey ones). Yes! Just poke it around in there where normal spoons won’t reach and scrape off all the marrow. Sucking also works. 😉

So, Tami, you’re on the right track!

And I’m especially excited that you’re making broth with marrow because that makes it so much better!

And if you haven’t already… take a peek at more Traditional Cooking skills with my free video series. Click here to sign up!

The #AskWardee Show is the live weekly show devoted to answering your niggling questions about Traditional Cooking: whether it’s your sourdough starter, your sauerkraut, preserving foods, broth, superfoods or anything else to do with Traditional Cooking or your GNOWFGLINS lifestyle.

What If You Can’t Make It?

Don’t worry. You can catch the replays or listen to the podcast!

Here’s how to submit your question. If we answer it on #AskWardee, you’ll get a gift!